4 Diesel Seat Ibiza Drag Racing Is a Sight to See... Once the Smoke Clears

Regardless of how it looks, you know things are about to get serious whenever an old car shows up at the start line for a quick quarter-mile battle. However, that’s not always the case, because some of those rides would look better in the crusher, including this Audi A4.
7 photos

Registered in Hungary and part of the B5 generation made between 1994 and 2001, it looks silly with all those stickers covering the black body. But nothing beats the amount of smoke coming out of the large exhaust pipe mounted right under the hood – or rather through it, to be more precise.

By the looks of it, it is now much quicker now either. Its performance is far from impressive, as it needed 15.805 seconds to run the quarter mile, with a 154.5 kph (96 mph) exit speed, at a drag racing event held in Hungary apparently.

Its rival isn’t anything to write home about either. An old Fiat Bravo, it's said to use a 2.0-liter engine that runs on gasoline, and we have no idea how much power it has. Still, it’s not far behind the Audi A4 B5 mentioned above, because it came just two tenths of a second behind it, at 140.6 kph (87.4 mph).

Without doubt, this is one boring drag race, and the whole reason why we chose to share it with you is because of that smoky A4, which is literally killing the planet a quarter mile at a time. 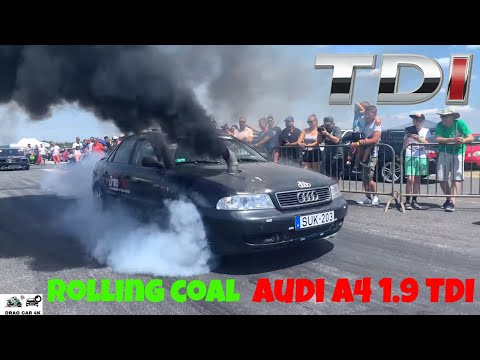