1 Seized $600 Million Sailing Yacht A Is Out of Dry Dock, No Explanation Given

3 Russian-Owned Private Jets and Helicopters Continue to Fly, Despite Sanctions

5 Two of the World’s Biggest Superyachts, Nord and Motor Yacht A, Sail Under Russian Flag
Car video reviews:
Up Next

Since the start of the war in Ukraine, international authorities have seized billions of dollars worth of superyachts, luxury real estate, private jets and other assets from Russian oligarchs. Most these assets remain in legal limbo, but superyacht Axioma is about to change hands to a new owner.
22 photos

Arresting or even impounding a superyacht is proving a very complicated process, as the U.S. has already found out after taking control over Amadea, which was seized in Fiji. In most cases, authorities can’t sell a seized superyacht right away, which means they’re stuck with paying running and maintenance costs until they can – which, at 10% of the value of the vessel per year, is not cheap.

Not the same can be said about Axioma, because a Supreme Court in Gibraltar, where it’s been “stuck” since early March, has just ordered that it be sold, yacht vlogger eSysman reports (see the first part of the video below). The peculiar case about Axioma is also the reason why it will sell: though owned by steel, oil and gas billionaire Dmitry Pumpyansky, it’s run by an international management company. That management company is on the hook for a $21.5 million with J.P. Morgan, and it is that standing loan that led to its seizure.

Put it differently, when J.P. Morgan learned that Pumpyansky had been added to the sanctions list, it realized that their best shot at recovering the money was through his boat. This is exactly what will happen now, because the loan will be covered with the money from the sale.

At the same time, this could provide Pumpyansky an opportunity to get his superyacht back, through a shell company. There is no chance Axioma sells at its market value, which is $75 million, because of its Russian connection and the fact that the superyacht market is not exactly booming right now. It might even sell for the amount owed to J.P. Morgan, which would mean someone, maybe Pumpyansky himself, is about to get an incredible deal.

Axioma is a 236-foot (72-meter) vessel delivered in 2013 by the Dunya shipyard, remarkable for its blue paintjob and elegant silhouette. It’s one of the few Russian-owned superyachts offered for charter when not in use by the owner, so we have plenty of photos of the interior and luxury amenities. Though smaller than most superyachts we’ve covered recently, it’s still a beauty, offering accommodation for up to 12 guests, a variety of water toys, private cinema, formal dining room, and a pool. 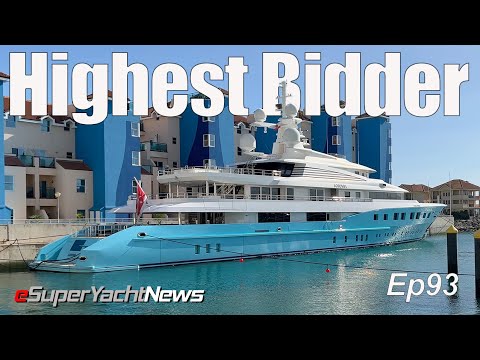