Official: Mercedes-Benz EQS Is the Most Aerodynamic Production Car in History

Even though it had a somewhat rough start in its first foray into mainstream manufacturing electric cars, with all its current EVs being just modified versions of ICE-powered vehicles, Mercedes-Benz has big plans for its future EQ lineup.
76 photos

The first step in the plan has just been officially revealed in the (soap-like) shape of the 2022 Mercedes-Benz EQS, which is the first of many EQ models to be built on the same modular EV platform in the next two years.

Many electric sedans and crossovers will accompany the EQS, which by coincidence is also the largest, the best performing of them all, and likely the most expensive, at least so far.

With a Cd value starting from as low as 0.20, the luxury EV sets a new benchmark, thus becoming the most aerodynamic production car in history.

One of the main benefits of such a slippery body is the range, with the Mercedes-Benz EQS 450+ able to achieve no less than 770 km (478 miles) of driving on a single charge, according to the WLTP testing procedure.

Only two powertrain options will be available at launch, both getting their electron juice from an in-house developed and built lithium-ion battery with a usable energy content of 107.8 kWh.

Being the range champion, the EQS 450+ is RWD-only for efficiency purposes. It's powered by a permanently excited synchronous motor with a maximum output of 333 PS (328 HP) and 568 Nm (419 lb-ft) of torque.

A smaller battery with a usable energy content of 90 kWh will be unveiled later on in the production cycle, while an AMG version with a combined output of 761 PS (751 HP) is also in the works to go against the similarly powerful Porsche Taycan Turbo S.

Technology and comfort-wise, the EQS is a tour de force, with up to 350 sensors monitoring the vehicle's functions or checking out its surroundings, and that's before even counting the antennas. The AI-connected sensors record everything from distances, speeds, and accelerations, lighting conditions, precipitation, and temperatures, to the occupancy of seats, the driver's eye blinks, or each individual passengers' speech.

The model can be charged with up to 200 kW at DC fast-charging stations, getting enough energy for up to 300 km (186 miles) of WLTP range in 15 minutes. 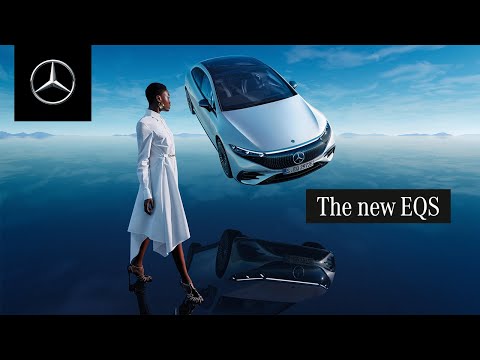