1 2018 Ducati xDiavel Shows up Dressed in an Exquisite White

Official: All You Need to Know About Ducati’s New Desmosedici Stradale Engine

A new chapter begins in Ducati’s history as the company has pulled the wraps off of its racing inspired V4. The powerhouse will be used to power the company’s crown jewel - the Panigale V4 which will emerge on November 5th.
14 photos

As with all Ducati engines, on the Desmosedici Stradale the design of the Desmodromic system is a key factor for obtaining top performance. Its components have been completely redesigned and miniaturized to obtain very compact heads, achieving a level of sophistication and lightness never seen on a Ducati bike before.

Magnesium is used for most large parts to offer strength and lightness, including head covers, oil sump, generator, and clutch. As a bonus, the engine looks like a piece of art by itself. The crankcases are made of aluminum while the upper casing includes the four aluminum cylinder liners with nikasil coating to ensure low friction and wear protection.

The four camshafts of the Desmosedici Stradale move the 16 steel valves, the intake valves having a diameter of 34 mm and the exhaust ones measuring 27.5 mm, which is quite large considering the 81 mm bore of the cylinders.

These camshafts are controlled by two “silent” operating timing chains. On the front timing system, the chain drives the intake camshaft, which in turn transmits motion to the exhaust via a pair of gears. On the rear, the chain drives the exhaust shaft, which transmits motion to the intake line. The system minimizes timing absorption to increase performance and reliability.

On the top, variable height intake funnels optimize cylinder filling at all rotation speeds and the fuel supply system is completed by oval throttle bodies, each containing two injectors - one above and one bellow the throttle.

Deep into its core, the four pistons are molded in aluminum and utilize the “box in box” technology that makes it possible to contain the skirt height and thickness under the piston crown thus reducing friction and inertial loads. The pistons are coupled to steel forged rods and manage a compression ratio of 14:1.

The crank pins are offset by 70 degrees like on the Desmosedici GP and require a Twin Pulse firing order that gives the engine a unique and distinctive sound. Maximum power is said to be north of 210 hp at 13,000 rpm while maximum torque of over 120 Nm (88.5 lb-ft) is achieved between 8,750 and 12,250 rpm.

Another interesting fact about the Desmosedici Stradale is the use of a counter-rotating crankshaft, which is a pure racing oriented feature. In MotoGP, such a contraption rotates in the opposite direction of the wheels to compensate for part of their gyroscopic effect, making the bike more agile and precise when changing direction.

The counter-rotating crankshaft also generates a torque due to its inertia that tends to lower the front end during hard acceleration. The effect is opposite during braking, pushing the rear down for more grip.

As expected, the engine is mated to a six-speed gearbox enhanced by the Ducati Quick Shift EVO enabling riders to shift gears with the throttle wide open. The link between the two is a slipper clutch that counteracts the loss of stability at the rear end when downshifting hard on the track.

Lubrication uses a semi-dry sump and is done by no less than four pumps; one for oil delivery to the engine’s internals, and three for return. The water pump, located in the V of the cylinders, is powered by a shaft driven by a cascade of gear wheels. Its location is designed to reduce the size of the circuit as much as possible, improving its efficiency and optimizing engine weight.

This monster is fully road legal, and Euro4 approved already, and we can’t wait to see it in the new Ducati Panigale V4 this November. 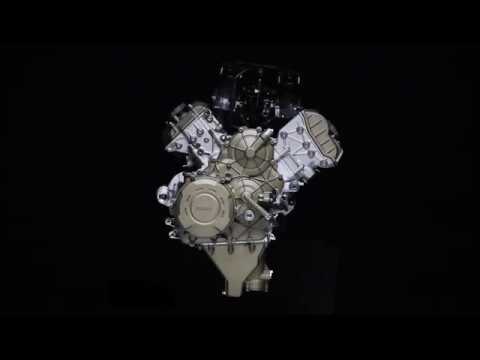