2 Mercedes-Benz AMG GT (C190) Being Trashed on the Nordschleife

1 photo
Keep your salt-cellar nearby before reading the following, because some of it is written while having a pinch of salt anyway.

Ever since the first pre-production prototypes of the Mercedes-Benz AMG GT (C190) started hitting the roads, most journalists saw it as a three-pointed star model with the Porsche 911 firmly in its sights, despite the rear-engined sportscar having two more seats than the upcoming AMG model.

Spied on the famed Nurburgring Nordschleife by our friends at TouriClips as early as last week, the following AMG GT (C190) is a bit of an odd pickle for two major reasons.

First of all, it is sporting the heavy camouflage that most prototypes have already lost since last year. If we were to speculate, this might be one of the earlier pre-production cars that Mercedes-Benz built to gather testing mileage, and they simply didn't bother to fit it with the new camouflage.

Second of all, the car is also sporting a detail that really made us scratch our heads. If you look closely, this model doesn't have the usual Mercedes-Benz license plate, but a... gasp!... Porsche press/test car license plate.

The S comes from Stuttgart – from where both Mercedes-Benz and Porsche come from – but the GÖ letters in the plate come from Geschäftsbereich Öffentlichkeitsarbeit, which pretty much means “Business Public Relations” in English.

This exact type of license plate is usually strictly reserved for Porsche cars, so seeing it on a Mercedes-Benz that is supposed to battle the 911 is a bit on the strange side to say the least.

We alreay know that the engineer in charge of developing the chassis of the current Porsche 911 (991) was snatched by Mercedes-Benz right before the AMG GT (C190) got the green light, but the Porsche license plates take the mystery to a whole new level.

Over the course of its development, the AMG GT (C190) was seen being benchmarked against the Nissan GT-R and even the Porsche 911 Turbo S (991) during testing, so some people (including us, ed) jumped to the conclusion that the model might also receive an all-wheel drive 4Matic version in order to really handle those cars.

Tobias Moers, the head of AMG, soon proved us wrong when he said that the AMG GT will only be rear-wheel drive and – at least in the beginning – using an eight-cylinder engine.

Internally codenamed M178, the 4.0-liter twin-turbocharged V8 under that long hood is said to develop around 500 hp and 700 Nm (516 lb ft) of torque in base-spec, making the AMG GT go pretty much like stink while having the fuel economy of a naturally-aspirated V6 sedan. Expect more information about the model as soon as we have it. 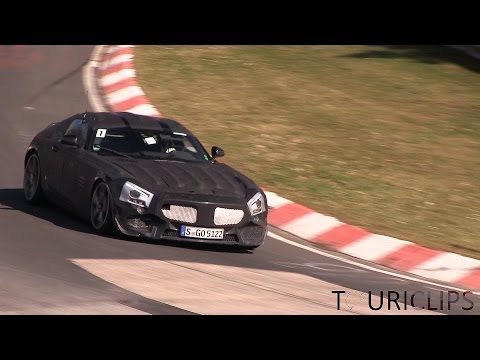