1976 Pontiac Grand Prix Puts on 26-Inch Wheels and Gold Paint, Wants to Be a Donk

Mircea Panait
Based on the 10th-generation Civic, the FK8 is the most powerful and exciting Type R yet. Honda prepares to send off this fellow in the United States with the Limited Edition (seriously, that’s how they call it), and the very first example of the breed is owned by a rather oblivious Utah man.
11 photos

“I’m excited that it goes zero to 60 (miles per hour) in three seconds,” says Zander L. at the very beginning of the following video. As far as I know, independent reviews have shown the Limited Edition hit 60 in 4.9s. On public roads instead of VHT-prepped strips and without the first foot of rollout subtracted, you will reach that speed in the 5-second range.

For a better understanding of what three seconds flat means in the automotive world, the mid-engine Chevrolet Corvette Stingray is the first car that comes to mind. Opting for the Z51 Performance Package helps the small-block V8 sports car from Bowling Green, Kentucky dip into the 2.9s.

Whoever did the editing for the following video clearly didn’t Google the specs for the Limited Edition, and this oversight is all the more ridiculous because the promo video is featured on Honda’s official YouTube channel.

The Limited Edition is the fastest FWD production car on the Suzuka circuit in Japan, thanks to a 2:23.993 lap time, which is good enough to beat old-school marvels that include the Ferrari F40. A grand total of 600 examples will be offered in the United States, and the starting price for this rarefied hot hatchback is… wait for it… $43,995 excluding freight tax and options.

What kind of extras, you ask? Although it serves as the swansong of the FK8, the Limited Edition is available with a $3,673 carbon-fiber kit and a $1,112 interior package. Adding insult to injury, Honda is asking $326 for a wireless phone charger whereas the 2022 model year Civic in range-topping Touring spec - a $28,300 car - flaunts wireless phone charging as standard. 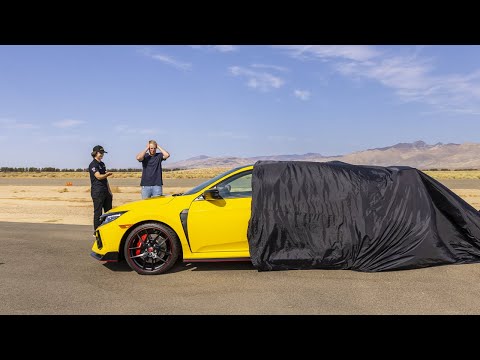