1 Man Says He Spotted a UFO Over His Garden, Could Just Be Party Balloons

3 Arnold Schwarzenegger Is Best to Fight Off an Alien Invasion, Poll Shows

Elena Gorgan
UFOs or UAPs are real, and the United States has official records of them visiting U.S. airspace. That doesn’t mean aliens are being secreted at Area 51 for testing, but it could potentially mean we’re not alone in the universe.
1 photo
The Pentagon is now investigating a series of UAP (unidentified aerial phenomena) or UFO (unidentified flying object) sightings throughout 2019. U.S. Navy personnel recorded and reported on the sightings, which included strangely-shaped objects flying in unnatural directions and at incredible speeds before disappearing without a trace.

The declassification of those files and the Pentagon investigation was the main topic of a recent 60 Minutes video report.

James Corden decided to ask President Obama about all that or, as he puts it, “dem aliens.” Even though the entire discussion is conducted as a joke, Obama makes sure to offer a clear separation between UAP sightings and aliens. UAP sightings do happen, and yes, footage of them is real. But the U.S. government isn’t secreting aliens and alien ships in laboratories or massive compounds (*cough Area 51 cough*).

Laughing, Obama says that this was one of the first things he asked after his inauguration: is there a secret lab packed with alien stuff? Obama has told this anecdote before, so we all know how it ends: no, there is no such lab.

As for the UAP or UFO sightings, whatever you want to call them, they’re real. And the U.S. doesn’t know what to make of them. “What is true is that there's footage and records of objects in the skies that we don't know exactly what they are,” Obama explains. “We can't explain how they moved, their trajectory… they did not have an easily explainable pattern.”

In other words, they’re real, and no one knows—or is willing to go on the record yet as to—what they are. 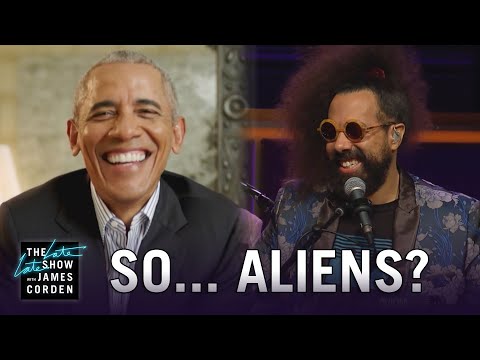