4 GM Volt Crossover Is One Step Closer to Production

5 Chevy Volt Tech to Underpin Minivan
Up Next 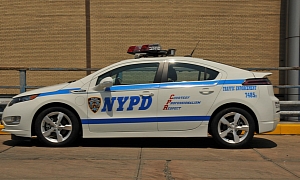 The New York Police Departement has recently switched to a healthier “lifestyle,” a step that will make the Big Apple a little bit greener. The NYPD is prepared to integrate 70 more EV into their car fleet.The new Volts were part of a total 70 new battery-petrol-powered vehicles to join the city’s fleet which now totals 430 advanced-tech cars and trucks.

The fleet is certainly the largest municipal electric vehicle fleet across the U.S. Another thing worth mentioning is that each Volt will also save about 4,000 gallons of gasoline in the city which equals about $15,000 in the life of each car.

Among the NYPD’s new cars the most desirable are the 50 Chevy Volts, which are rated by EPA as the most fuel efficient compact cars sold in the U.S. To help charge the city fleet, New York now has 70 EV charging stations, installed with assistance from the Energy Department. The decision taken by the NY municipality has multiple effects.

Firstly because of such an acquisition the general public can come to know more about the advantages and fuel economy of electric vehicles, which is certainly suitable for the commercial aspect of Electric Vehicles in the long run.

On the other hand the EV offers a low emission, environment friendly alternative balancing in a certain way the polluting environment of the urban traffic.