Elon Musk Confirms That Tesla Superchargers in the U.S. Will Gain CCS1 Plugs

Never bring a knife to a gunfight. That's common sense right there. But then again, would that stop you from getting involved in a race against a car that's faster than yours? Or would you have a go just for the fun of it? Of course, there's also the case in which you aren't aware of the performance gap. And that's when you might be disappointed the most.
15 photos

Sure, a base-level GT-R is cheaper than the NSX Type S, but this time we're looking at the NISMO version. And one of those will set you back at least an extra $40,000 if you're not keen on getting too many extra added options.

And that goes for the 911 Turbo S as well. Albeit, in this case, the Porsche is slightly more expensive than its Japanese rival. With that kind of power lining up for a race, it can be dangerous to have all four cars going all out at once.

The GT-R NISMO and the NSX Type S are rather similar in terms of performance, although their engineers took on a slightly different approach. The GT-R is an apex predator of the ICE age, with a twin-turbo, 3.8-liter V6.

The NSX has a slightly smaller internal combustion engine but extra three electric motors to get it going. Performance-wise they should be pretty evenly matched. Both cars are rated for 600-hp and just under 500 lb-ft (677 Nm) of torque. This is where the NSX has the upper hand, but then again, it's also slightly heavier than its Japanese rival.

We all know that the C8 Corvette is a great package considering the price, and we're all keen to see the new ZR1 as soon as possible. So things are looking grim for Chevrolet's most exciting creation these days. From the get-go, it loses the battle, but the role of a camera car does fit it quite well.

If you expected a closer battle between the Nissan and the Acura, think again. The GT-R NISMO might feel overpriced for some, but it hasn't been called a supercar killer over and over again for nothing.

In an attempt to even out the odds, the hosts of the show decide to go for a rolling start format instead. And things become a lot more intense at the top, as the NSX Type S is fighting to cross the finish line before Godzilla does so. All those efforts are in vain, as the VR38DETT engine helps the driver secure a second consecutive victory.

But hold the victory dance as the 911 Turbo S is brought into play for the final battle. The GT-R earned its reputation of a "supercar killer reputation," but the new 911 Turbo S is no ordinary supercar! If that didn't spoil the outcome for you, you should bet on German engineering for this final race. 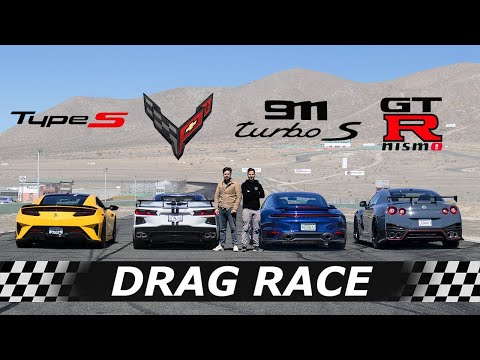