Introduced in 2003, the limited-edition, track-oriented version of the E46 M3 continues to be one of the most thrilling cars that the Bavarian manufacturer has ever built.

Now 19 Years Old, the BMW M3 CSL Remains One of the Best M-Badged Cars of All Time

Today, the high-performance editions of BMW’s 3 Series are some of the most revered cars to ever come out of Europe. It all started in 1986 when the manufacturer’s in-house motorsport division developed a road-legal homologation special of the E30 that was meant to comply with the Deutsche Tourenwagen Meisterschaft (DTM) and FIA Group A Touring rules.

In 1992, two years after the introduction of the second-generation 3 Series, the new M3 hit the streets. No longer a homologation special, but still an outright high-performance vehicle, the E36 M3 ditched its predecessor’s S14 four-pot in favor of a larger, M-built, naturally-aspirated, inline-six. The combination of power, drivability, and practicality (boosted by the availability of a four-door sedan variant) was appreciated by enthusiasts all across the world, which translated into record-setting sale figures for an M-badged model.

Determined to replicate the marketing success of the E36 M3, BMW’s M division ramped up its efforts for the third generation. Unveiled in the fall of 2000 as a 2001 model, the beefed-up E46 was thoroughly revised in terms of style and performance, boasting an all-new S54 straight-six that upped the power past the 300 hp mark for the first time in model history.

While the standard E46 M3 was a joy to drive and undoubtedly superior to its predecessor in every way, it got even better in the second half of 2003, when the Germans launched a track-friendly limited edition that continues to soothe the soul of high-performance aficionados nineteen years later.

Produced in only 1,383 units, it was christened CSL (Coupe Sport Leichtbau, or Coupe Sport Lightweight) as a homage to the legendary 1972 3.0 CSL, and, as the name implies, it was given a weight-saving treatment, as well as a bunch of performance-enhancing upgrades.

When viewed from the outside, it became clear that this was no ordinary M3. Apart from those three special letters found on the front fender grilles and trunk lid, the car received a distinct front bumper that didn’t feature fog lights (like the standard M3), but instead, came with a single porthole on one side that redirected fresh air to the engine’s enlarged intake duct. In addition, the CSL got a new curved spoiler lip integrated into the trunk lid and a set of bigger, yet lighter 19-inch wheels wrapped in Michelin Pilot Sport Cup semi-slicks. The highlight, however, was the exposed carbon-fiber roof that made the CSL the first M model to sport such an element.

To shed more weight, engineers employed a host of motorsport-derived fabrication methods that were less visible to the naked eye. For example, the hood was made from aluminum, glass-reinforced plastics were utilized in various structural points, much of the sound insulation was taken out, and the rear window was thinner thanks to the use of a special type of glass.

The lightweight treatment continued inside where the electric seats were swapped with a pair of slim buckets seats and the door panels were thinner and thus, much more spartan. Some of the standard M3’s upscale features like the navigation system, stereo, or electronic climate control were also taken out and replaced with an analog air conditioning system and a bunch of carbon fiber sections. However, unlike the electric seats, door panels and navigation, the stereo and climate control unit were available as no-cost options for those who didn’t mind the extra weight.

Other distinct interior elements were the steering wheel that came with a single button for the M track mode, whereas the buttons for cruise control, stereo, and phone found on the regular M3 were removed. Moreover, the wheel rim was covered in Alcantara, the same material used for the seats and handbrake lever.

All these features made this limited-edition model 243 pounds (110 kg) lighter than its standard M-badged sibling, but shedding weight wasn’t the engineers' only objective. They also made improvements to the suspension, steering rack, and braking system.

Under the hood, the CSL hid a unique version of the 3.2-liter S54 straight-six designated S54B32HP. It came with upgrades such as a revised carbon fiber intake, slightly more aggressive camshafts, a performance MAP sensor (instead of the regular S54’s MAF sensor), a straightened intake manifold, or a lighter exhaust manifold.

In terms of performance, these modifications amounted to 355 ponies, a gain of only 17 hp over the conventional, European-market M3. But, with less weight and a host of chassis improvements, the CSL became a different kind of beast. Whether it was driven on a track or a nice, dry, twisty road, the car behaved exceptionally well, inducing goosebumps and a wide smile in the process. You can see exactly what I’m talking about In the YouTube video below by Novitec Group.

In the years that followed, BMW’s M division has released a multitude of terrific models, some of which are lighter and noticeably more powerful than the 2003 M3 CSL. That being said, the lightweight, limited-edition E46 with its high-pitched, naturally-aspirated six and spartan, track-focused interior still manages to provide a distinctive driving experience that becomes instantly addictive, which is why it remains one of the best M-badged models ever built. 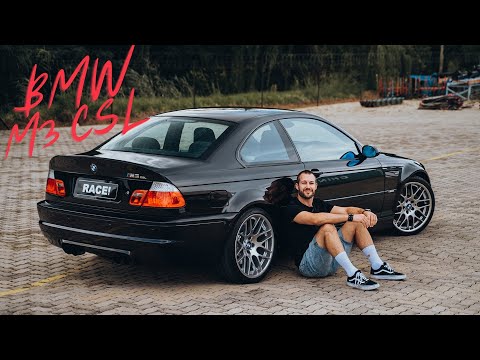