1 Novitec Plays Spot the Changes With the Ferrari Roma, and There Are a Lot of Them

2 Tuned Rolls-Royce Cullinan Looks Like a Million Bucks, Does the ¼-Mile in 13.6s

5 Watch: Novitec Takes Its McLaren 765LT Out for a Flame Throwing Demonstration
Editorial

Stephen Rivers
Hollmann International is one of the largest clients of the world-famous supercar tuner Novitec. In this video, Novitec takes us on a tour of roughly 40 million dollars worth of cars. Many are modified and tuned by Novitec themselves.
6 photos

Unlike other tuners such as Manhart or Mansory, Novitec is a tuner that tends to be a bit more subtle. This video is a perfect demonstration of that too. While we start out the film focused on a plethora of Maybach sedans, we are quickly eschewed towards a pair of Ferrari SF90s.

As our host points out small differences, he highlights the work that Novitec does. For example, one of the cars already has Novitec wheels and will be fitted with new Novitec suspension parts in the upcoming days. The other SF90 features the factory-fitted Fiorano package. It includes many aero changes but comes with some drawbacks.

First, it costs some $55,000 and externally is almost indistinguishable from cars without the package. The only feature that gives it away is a small ducktail spoiler at the rear. It also requires the deletion of the axle lift system.

Novitec says that they're working on a similar package with the same visible ducktail spoiler for far less cash. They even say that they can install an axle lifter on your Fiorano-equipped SF90 if you'd like. That would certainly make trips to the grocery store less stressful.

Then we dive into a car with some serious performance parts from Novitec, a black Lamborghini Aventador SVJ. It's fitted with a more free-flowing Novitec race exhaust. That increases power and turns up the volume at the same time.

This Lamborghini Aventador is so loud, in fact, that during episode 1 of this series, the car was kicked off of an airstrip for being too loud, according to Novitec. It also features a custom Novitec hood, side skirts, and a modified ALA system.

Then we dive into a car that's already modified to the moon by its manufacturer, the Porsche 935 race car. It's one of only seven fitted with naked carbon fiber covering the body.

Next, a group of gigantic Mercedes G-Wagons, one of which is a 6x6. Sitting next to a stock G-Class, these modified SUVs are more than 6 inches taller.

As the video starts to wind down, we get a closer look at the inside of a Maybach GLS. Novitec says that its custom interior, fitted by Hollmann themselves, is one of the best but reminds viewers that Novitec will also customize any interior of your choosing.

It's quite clear that for those with the cash to splash on supercars and SUVs, the folks at Novitec can make every one of them unique. We can't wait to see what gets a little additional horsepower next. 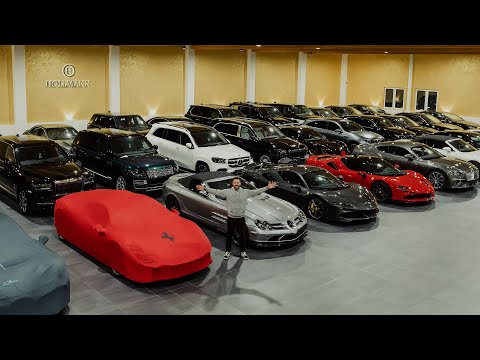