4 McLaren Senna Was Sensational, But Novitec Made It Even Better

Home > News > Tuning
Vlad Mitrache
The Tesla Model X is one of those cars everyone has an opinion on, but unlike most cars where those tend to stick within a relatively small interval, with the X they can go from "worst thing to have ever put rubber on tarmac" to "this is simply the best car ever made".
1 photo
In most cases, the reaction comes down to two things: whether the person in question is open to the idea of EVs and whether or not they have driven the X. If it's "no" on both accounts, then expect to hear the worst about the electric SUV. If it's "yes" and "no", then you could get something like "it's great but, my god is it hideous!" Finally, if it's "yes" on the line, well, then everything is possible.

If we're being honest, the only real criticism you can throw at the X is related to its exterior design. As it turns out, not everybody thinks the clean look of the Model S translates well onto a larger, taller vehicle, and that's before you even get to the X's rear where it feels like the designers just gave up.

Well, if there's one thing that can help with all that, it's some aftermarket tuning, and when it comes to that, you can do a lot worse than Novitec. The German company has made a name for itself based on all sorts of performance vehicles, from supercars to SUVs, but it also kept up with the news and developed packages for EVs as well.

The Tesla Model X definitely benefitted from the Novitec treatment. The most important bit is probably the one we can't really see: the sports suspension that also drops the SUV significantly, making that bulky body seem less... bulky.

The wheel and tire combination also works in that sense because there's nothing worse than a big car on small wheels. These golden-finished rims were designed with Vossen specifically for the Model X and serve several roles other than just the aesthetic one.

The carbon fiber elements round up Novitec's interventions on this Model X. The EV gets a new front lip, side skirts, a rear diffuser, and the mandatory lip on the retractable wing, all there to improve the airflow on what is already the world's most aerodynamic SUV.

With all that taken care of, the clip's presenter proceeds to deliver a somewhat late Model X review (this is one of the early P100D variants; in fact, they claim it's the first in that spec to reach Europe), but a very enjoyable one nevertheless. Plus, it shows you how someone who's just driven a McLaren GT and a Ferrari 458 Speciale - both modified by Novitec - can still be impressed by an SUV. 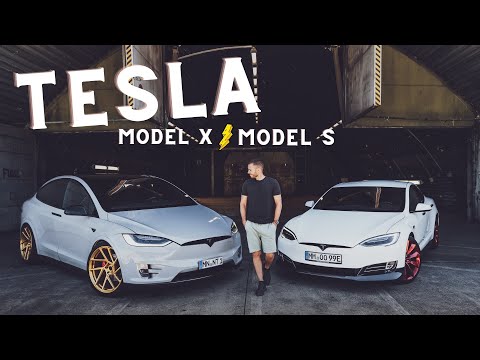