1 The Mini Pop Bee Active Gear Is the Cutest, Tiniest Camper That Can Sleep 4 in Comfort

2 The 1930s Ford Model A House Car Was Ford’s First Attempt at a Motorhome, Awesome

3 Z-Triton 2.0 Is the Trike-Boat-Camper That Wants to Be World’s Most Sustainable RV

The idea of backpacking is not – and can’t be – appealing to every cyclist considering the possibility of traveling across a bigger distance on their bicycle. For those cyclists for whom sleeping in a tent on the ground is a big no-no, there’s something called the Nomad bicycle camper.

The Nomad is not a mass-produced camper, but you could still get it if you’re really into the idea of it and especially if you’re willing to invest some time and effort into a new home project. It’s a DIY (do it yourself) camper that you make out of a little plywood and a lot of trash – coroplast campaign billboards recycled after use.

The Nomad is the creation of designer Paul Elkins, who has been flirting with the idea of micro-camping since 2002, when he traveled the country in the back of his car. Thinking about how he could possibly downsize even more, he came up with a plan to turn a regular, pedal-powered bicycle into the towing vehicle. That meant that the camper attached to it would have to be very lightweight and, at the same time, aerodynamic but stable enough in crosswinds.

The result is the Nomad: a camper that weighs just 60 pounds (27.2 kg), carries all the comforts of home (so says Elkins, but you do have to take it with a grain of salt), is stable both in camp mode and on the road, and resembles an Airstream. If you squint hard enough.

Jokes aside, the Nomad is the perfect example of upcycling done right, as well as pure minimalism. It’s also comparatively dirt cheap, since the entire cost of the build is $150, which includes $20 for an old bike from which to source the wheels, the plywood and zip ties, but doesn’t include the $20 you have to pay Elkins for the detailed plans. Still, for $170 and a chunk of your spare time, which depends entirely on your skills, you get a decent, one-person camper that you could rough it up in for several days on the road.

The lower frame is made of plywood, but everything else is coroplast. For one camper, Elkins used four sheets of it, held together with zip ties, covered in tape to prevent water from getting in. The shell is insulated with bubble plastic, and it’s also well ventilated by means of two flaps by the head of the bed, two small plexiglass fold-down windows, and one skylight.

Inside, Elkins placed a one-person mattress, with everything else on the sides. He’s not much of a tosser at night, that much is certain: the kitchen is on both sides of his feet, with a baking pan for a sink and a glass jug for a water tank. Oppositely, there’s a propane camping butane encased in coroplast, and some space to put a plate or chop up vegetables. Above are coroplast cabinets and shelves, holding food and spices.

Two plastic containers are for his clothes, and he even included a small book shelf. A bigger storage box is underneath the trailer, designed specifically to carry heavier stuff that keeps the center of gravity low in strong winds. An MP3 player and two speakers are the only entertainment providers, and there’s an LED light for reading. They do just fine: you don’t go camping in your bike to binge-watch Netflix on a widescreen TV, after all.

For stability in camp mode, a pair of conduit legs is used. The rear door, which opens upwards and is made of a double layer of coroplast, serves as awning when cooking and offers some protection against the elements.

In March this year, Elkins remodeled the original Nomad, both on the outside and in. It’s now shorter by 20 inches (50.8 cm) and no longer integrates the butane burner, presumably after Elkins realized having an open fire in such a small place wasn’t exactly ideal. Despite the shorter length, it has more storage and looks even homier than the original, and that’s because he completely integrated storage into each lateral wall. Still amazing is the fact that all the shelves and cabinets are made from coroplast, just like in the original model, and he still used zip ties instead of glue and screws.

The Nomad is not the first bicycle camper to make headlines, but it’s probably the one to have gotten the most miles. Elkins used it for his travels, calling it his “home away from home.” 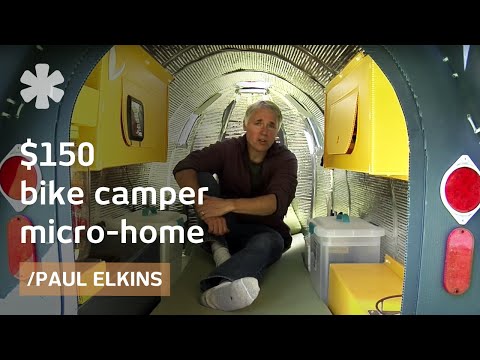 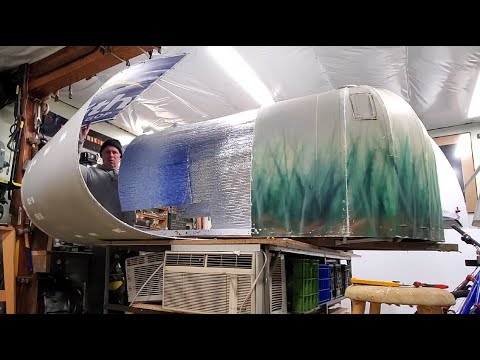