Vlad Mitrache
We’ve been showing you clips with all sorts of cars, including modern Mercedes-Benz models, tuned to the teeth with modified exhausts and huge turbochargers making more noise than a vacuum cleaner used as a pillow.
1 photo
Well, this clip won’t have any of that. This is the Mercedes-Benz 300SL Roadster, the car designed in 1954 and known best as “the less special version of the 300SL Gullwing Coupé.”

It is arguably the most easily recognizable model in the whole history of the three-pointed star company, and considering how many iconic models have come out of the Mercedes-Benz factories throughout the years, that says something about how special the 300SL is.

As you click “play” below, don’t expect to hear loud exhaust noises or engine revs, nor to see burnouts or drag races. This is the kind of clip that allows you to enjoy the simple beauty of a car that will hopefully continue to run as long as humankind continues to extract oil out of this Earth. And when that is no longer possible, somebody will convert the 300SL to run on electricity or whatever we’ll be using then, so that even more generations will get the chance to enjoy its appearance.

In its day, the 300SL was considered “a race car for the street,” but with today’s standards, it would have a hard time qualifying even as a sports car. That is in terms of cynical performance numbers, because actually driving this thing - and doing it fast - will go down as one of the most visceral experiences of a modern day person’s life. Simply turning that huge steering wheel might prove a big enough challenge for the power-assisted generations.

Besides its groundbreaking design, the 300SL was also a technological pioneer, being the first car to use a direct fuel injection system (offered by Bosch) that boosted its power output by almost 25%, making the 300SL the fastest production car of its time. Its top speed (under certain circumstances, of course) exceeded the electronically limited one all German manufacturers have agreed on: the 300SL was capable of reaching up to 260 km/h (161 mph).

This car demands respect, and it doesn’t really need any introduction listing its achievements to get it. 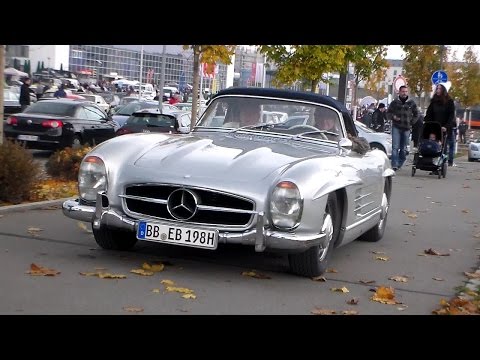