The final year for the second generation, the 1967 Corvette went out with a bit of a bang. More to the point, Chevrolet offered the Turbo-Jet engine with 435 horsepower on tap from 427 cubic inches (7.0 liters) of displacement.
22 photos

This fellow here – chassis number 194677S116121 – is one of those cars, and it’s been recently restored to award-winning standards. Speaking of awards, this Corvette has won plenty of them since it was refurbished.

Offered by Barrett-Jackson at no reserve, the open-top sports car is “fully documented with the original window sticker, tank sticker, protect-o-plate, and keys.” As you already know, the most important factory option comes in the guise of the L71 big-block V8 with solid tappets and a hot cam. Three two-barrel carburetors feed the engine, and the side-exiting dual exhaust helps it breathe out to the tune of 460 pound-feet (624 Nm) of torque.

RPO code F41 means special springs, matching shocks, and beefier stabilizer bars for the front end and rear axle, helping this ‘Vette handle as well as it looks. Finished in Rally Red but also beautified by a black stinger on the hood, the old-school sports car flaunts a three-spoke steering wheel, leather upholstery, and an analog clock in the center of the dashboard.

Described by Barrett-Jackson president Steve Davis as “desirable in every way” and “the real deal,” the Corvette is being auctioned with a photo album that details every stage of the restoration process. Chairman and chief executive officer Craig Jackson owns an identical car to this fellow, bought 20 years ago, and this says a lot about how wild the bidding will get. 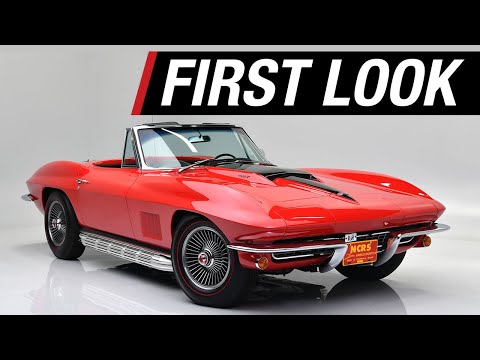