3 The 2021 RS e-tron GT Isn't Official Yet, But Here Are the First Reviews

No Need to Do It Yourself, Six Small EVs Were Driven Until They Ran Out of Juice

This isn’t the first time Mat Watson from the popular Carwow YouTube channel decides to pit electrified or fully-electric cars against one another. What’s different on this occasion is he’s not racing them or simply comparing them. Instead, the idea was to find out how far each vehicle goes in a real-life situation. Yes, they’re running them until they totally run out of juice to see what happens in each situation.
91 photos

Watson gathered round a total of six compact and affordable (at least in EV terms) cars: a Honda e Advance, the Mini Electric (or Cooper SE, the name depends on the market), the tiny VW e-up!, two platform siblings (Peugeot e-208 and the Opel / Vauxhall Corsa-e), as well as the ubiquitous Renault Zoe.

Without losing too much time with an introduction, Watson jumped in the Honda e Advance first, giving us a list of technical details (he does that every time he moves into the next car) while also keeping tabs on the others with his colleagues.

From then on, he’s got time to jump in the Volkswagen (from the 6:24 mark) and the Peugeot (8:20) before hearing news of the first car that went into trouble. The Honda e was the first to get the tortoise readout signaling the car is about to run out of charge.

Next up was the Mini E (10:55), followed by the Peugeot (15-minute mark) and the Vauxhall that initially bowed out of the test fast but still carried on. Much to the surprise of everybody, the Corsa-e almost reached its intended charging point.

Ultimately, the last car standing was the Renault Zoe, although you’ll see at the end that stellar performances were uncovered from unexpected places, with Mini and VW ultimately exceeding their claimed ranges (106% and 102%, respectively).

It was to be expected the Zoe would outperform all others, given that it has the largest battery pack, at 55 kWh. In the end, although Watson did get incredibly bored trying to extract every electron on a short course between two roundabouts, the Renault (96%) also failed to reach its claimed range – the same as the Honda (90%), Peugeot (74%), and Vauxhall (83%). 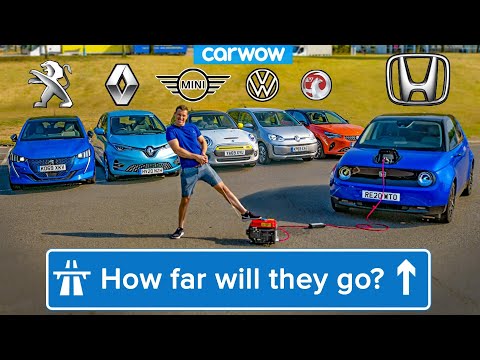