The adoption of both Android Auto and CarPlay is on the rise, and that makes perfect sense because they’re pretty cheap to install. Furthermore, they allow us to overhaul the driving experience with easy access to navigation apps, music services, and phone calls right from the head unit.
6 photos

But as we said so many times before, one of the biggest shortcomings of both Android Auto and CarPlay is the limited support for apps, as developers specifically need to work on a car-optimized experience that would be then added to their software.

And needless to say, not all apps can be used in the car for obvious reasons, though there are moments when they could actually come in handy. Take Netflix, for example, which is one of the biggest no-noes when getting behind the wheel. While you’re not supposed to use it on your iPhone while in motion, watching a movie on Netflix is something you should be able to do when parked and waiting to pick up your kids from school, for example.

That isn’t possible on Android Auto and CarPlay because such apps are blocked from the very beginning, which is why some users are looking into ways to get access to the full app ecosystem.

One way to do this is to install a full iPad in your dash and therefore no longer need an iPhone to power the experience in the cabin.

A new custom build detailed on YouTube by Soundman Car Audio shows how the iPad mini can end up feeling like home in a Nissan 350Z using a clever idea relying on a panel that takes the place of the OEM Storage place in the dash. In other words, the 350Z owner isn’t losing anything but instead is getting so much more with the addition of an iPad mini.

While I’m not a big fan of the glossy finish, it looks as premium as it gets. And just as expected, the iPad can slide in and out anytime you want, so you can always take the tablet back home if you want to install updates and things like that. 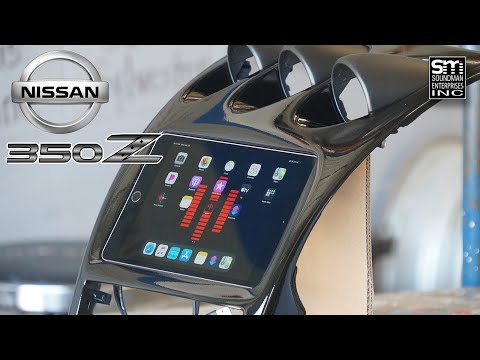