Cosmin Vasile
The fine folks at Hello Games are at it again, as the studio recently released yet another No Man Sky’s update. This one’s a bit more niche if we’re allowed to say that because it focuses on hunting worms, big worms.
6 photos

The update introduces a new expedition called Emergence, where players must locate and destroy the Titan Worm impacts sites while they’re stranded on planet Wasan. Collecting the Vile Spawn after killing these worms is one of the goals of No Man’s Sky players participating in the new expedition.

Of course, that’s not all there is about Emergence. As players cleanse planets of these huge sandworms, they will be fed tidbits of information about a dark cult. Those who complete the new expedition will get to know everything about the dark cults and, ultimately, confront the Atlas with the evidence.

Also, the release of Emergence marks another premiere for No Man’s Sky, as this is the game’s first expedition to feature a narrative. Even better, the update doesn’t just add the new expedition but also some improvements for the game.

To make Emergence more interesting, the titanic worms throughout the universe have been enhanced with a variety of new biologies and types. Also, they can now be found with a broader selection of more monstrous variants. But, more importantly, No Man’s Sky players can now tame and grow a sandworm companion to feed, pet, and ride in the true Dune-esque style.

Several thematic rewards in the form of cosmetic items have been added, too, such as a many-toothed grotesque alien head, a Ghastly Trail that applies a unique, organic effect to the Jetpack’s exhaust nozzles, an eerie skull, and an organic element to pyrotechnic display with the Flesh Launcher firework.

If you’ve already seen Denis Villeneuve’s Dune, why not start growin a sandworm and learn to ride it? Or maybe go sandworm hunting on a not-Arrakis planet? 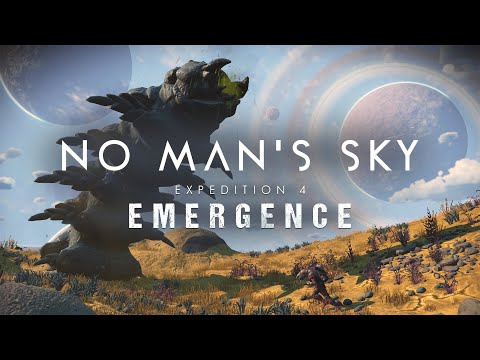