4 Jeep Wrangler Sedan Is All Kinds of Weird

We're getting quite close to the official unveiling of the 2021 Ford Bronco, so we really didn't expect any new information to come out. However, these latest rumors are relevant for the 2022 model year and the performance model that will join the lineup at that time.
1 photo
The YouTube channel RevMatchTV was among the first to pin down the 3.0-liter EcoBoost engine under the hood of the new Ford Bronco. Citing the same company insider, the same channel now states that the Bronco Raptor isn't coming after all.

Instead, Ford apparently wants to call it the Bronco Warthog. It's still going to be tuned by Ford Performance and has a turbocharged 3.0 EcoBoost engine under the hood. Engineers apparently have less than a year to finalize the setup, which will have about 400 horsepower and specialized off-road suspension.

"Warthog" frankly sounds even better than "Raptor", but that could just be because of all the hours we spent grinding away in Halo games. From what we can figure out, the differentiation comes from the type of terrain these vehicles tackle.

Raptors are supposed to be high-speed Baja trucks for the road, while the Warthog is a climbing 4x4. Based on previous statements from dealers, this is supposed to be aimed at hardcore off-roaders with front and rear locking differentials.

We already know that the Bronco will have 255 and 285mm-wide tires, the same as a Wrangler Sahara and Rubicon. It's also expected that Ford wants the biggest-possible tires to be fitted, 37-inch ones. A Jeep would need a two-inch lift for that.

As we reported yesterday, Jeep sold almost 230,000 units of the JL and JLU last year. The Bronco is aimed squarely at that market. In addition to the 3.0 EcoBoost, it will also offer the 2.3-liter EcoBoost four-cylinder, outgunning your average Wrangler's 2.0-liter unit. Meanwhile, the 2.7-liter from the Edge ST will fill out the middle of the engine range. 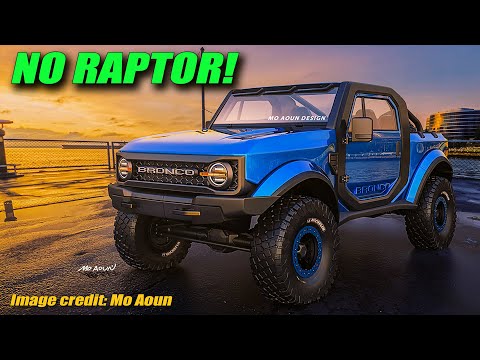