It really doesn’t matter how small you are, important is what’s inside the heart and mind. Basically, this kind of thinking applies even to the automotive realm, as demonstrated by this nifty little Toyota GR Supra and the rather puny track its driver chose for a skills exhibition.
17 photos

With all the huge drag racing events going on around across America it’s sometimes easy to lose sight of the tracks that barely allow two cars going side by side and a few people around them. So, let’s think on a local level for a change because it may be the perfect setting for demonstrating that small doesn’t necessarily mean anything less feisty.

After all, the Mk V Toyota GR Supra is decidedly more compact than its opponents in the video (embedded below) from the Jmalcom2004 channel on YouTube, but the little Black Beauty doesn’t seem scared at all when properly shod with a set of Hoosier Tire racing hoofs.

According to the scarce description provided by the YouTuber, the secret might be the fact this Japanese steed is of the turbo variety and its preferred “hay” also contains a healthy dose of nitrous vitamins. Well, enough with the equine innuendos, because the most famous pony of them all isn’t the first contender.

Instead, the GR Supra initially lines up (from the 2:35 mark, after an initial solo run) with Chevrolet’s high-performance Camaro ZL1 during the day, so everyone can watch the little Supra provide a savage quarter mile beating.

Even though we’re dealing with a track that doesn’t even have a set of finish lights (let alone an ET and trap speed board), the gap is significant enough to make sure there are no doubts when it comes to selecting the Supra as the victor.

Next up comes some night-time action and from the 4:50 mark the GR Supra seems hungry for some Ford Mustang GT blood. Things get a bit mysterious because there’s very little light, but once again the GR Supra takes the lead from the first moments of the race. So, case closed on this little vs. big debate, at least for now. 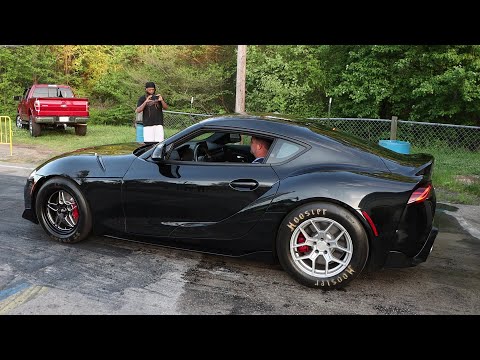