5 Nitrous Turbo Supra Eats Both ZL1 Camaro and Mustang GT for Breakfast and Dinner
Car video reviews:
Up Next

Dwayne Johnson Is Done With Fast and Furious, and the Vin Diesel Feud Lives On

Just in case you fancy old-school muscle drag racing in stock form, then it’s better to look away. It’s not that we’re not dealing with classic nameplates. The Chevrolet Chevelle and Oldsmobile Cutlass are as vintage as they get. Sure, in this particular case there may be a serious generational gap, but they’re both from the 1970s or 1980s. The twist is that none of them has remained just like the factory ordained.
12 photos

Still, if you love highly entertaining quarter-mile drag racing, this skirmish between two General Motors-produced machines hits all the right switches and buttons. Cool-looking rides - check. A classic atmosphere - double-check. The surprise win at the end with a little something just for the thrills - triple check. Now, if only we had a little more information on these wonderful beasts...

Unfortunately, the host of the Jmalcom2004 channel on YouTube isn’t exactly in the habit of providing too much background to go along with these races. Some prefer the action to speak for itself, without any additional noise save for the roaring mills tucked under the hoods. Perhaps it’s better that way. So, all we have to go with is the title, which hints toward both rides being prepared by a Soperton, Georgia-based shop called Hustle Hard Performance.

And the players involved are a nitrous-equipped, big-block Chevrolet Chevelle along with an all-motor Oldsmobile Cutlass. As far as we can tell, we are dealing with a post-1971 second-generation Chevelle, as well as a Cutlass that most likely belongs to the fourth-generation Supreme line. Anyways, the exact model year probably doesn’t matter anymore, considering the modifications these rides have gone through.

And they’re both ready for some cool action, with the Chevelle pushing so hard it almost wheelies off the starting line. Still, it manages to remain composed in the face of great adversary, as the Olds does not relent until extremely late during the race. With no ET and trap speed board, there isn’t any official confirmation, but it seems the Chevy nailed the win in the end... and also blew the rear window in the process. Maybe the driver needed more airflow, who knows? 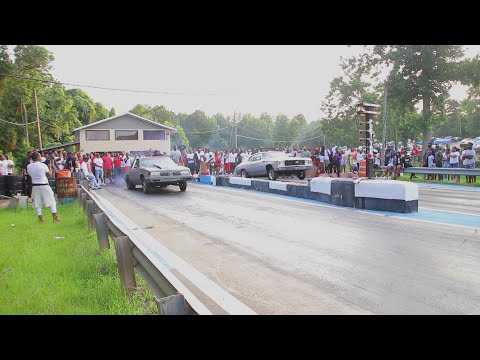