2 The 2023 Nissan Z Looks Athletic and Chic, Here's What Its Designer Has To Say About It

4 Jay Leno Drives the 2023 Nissan Z, Says That It Hits the Right Spots

Home > News > Auto Motorsport
Alexandru Boghiu
We’ve seen how the Nissan Z does in a straight-line duel against American muscle. But this time, it goes against its brethren.
9 photos

Both cars had a good launch, and the older brother seemed to have the upper hand for a brief moment, as the Z’s NLS apparently is far from perfect. The car bounced back real quick, though, recovered the lost ground, then went on to cross the finish line first. However, the small gap between the two was reason enough for a second run.

This time, the “young blood” completely thrashed its older sibling, with a much more visible distance between the two right from the get-go.

So far, so good when it comes to going at it from a standstill. But are things any different in a rolling race? Well, not really. The new Z won 3 out of 3 and smoked the NISMO, which is showing its age. The old car simply couldn’t keep up.

That’s not to say the NISMO 370Z is trash – far from it. Apparently, it’s almost as good around the track as the new Z since it had a similar hot lap time. Not to mention the newer car seems to be “all over the place” when it comes to braking at high speeds – something which the 370Z can handle gracefully.

Ultimately, the paper data was right about the Nissan Z, but it seems there’s still room for improvement. 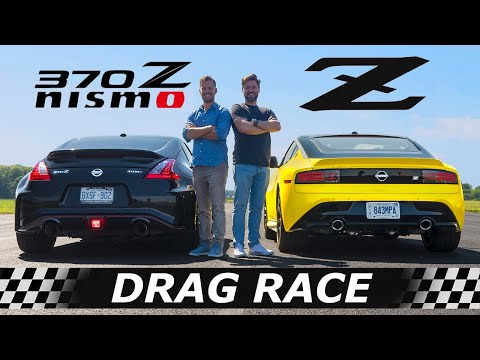