Mihnea Radu
We've been showing modernized 240Z renderings for many years, and it turns out it wasn't for nothing. Today, Nissan released a short teaser video called "From A to Z" where the obvious star of the show is a sleek new Z sports car. This is big; this is really big.
3 photos

To say that we're excited about the new Z would be an understatement. This way, the Toyota Supra won't have the JDM market all to itself, plus the 350Z/370Z community will finally have the successor it's been asking for.

The new Z car has been rumored for many years and was supposed to be shown as a concept about a year ago, when the 240Z celebrated its 40th birthday. Nissan is in a really rough state right now, but we've often argued that exciting halo cars like the Z and GT-R are key to its survival.

As you can probably tell even from these dark teaser screenshots, the sports car that's supposed to replace the 370Z is very minimalist, doing without the excessive creases. Also, the round headlight halo is an obvious tribute to the iconic early models.

We think the 2021 or 2022 model will be an evolution of the older 370Z in terms of the platform. The two could have similar proportions, but Nissan's technology and design have evolved a lot since 2009.

The FM rear-wheel-drive platform still underpins models like the Infiniti Q60 Coupe and the Q50/Skyline sedan. That's why everybody expects Nissan to use a 3-liter twin-turbo V6 engine that's expected to give the 400Z anywhere between 350 and 500 horsepower.

The wildest of speculative rumors even talk about AWD being an option. But we just hope the automaker's parts-sharing exercise doesn't mess up the steering and handling. The 400Z needs every advantage it can muster against the established Toyota Supra. 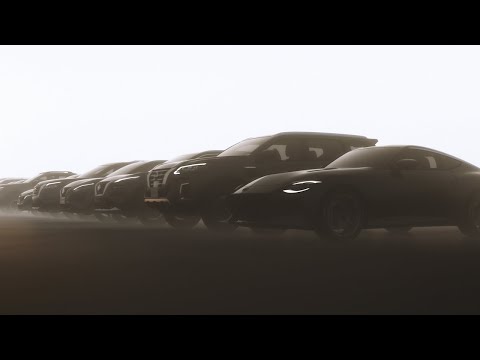