Around the same time it was producing the legendary RB26DETT, the heart of the last three Skyline GT-R generations, Nissan also built a smaller unit that was equally impressive.

In the mid-1980s, the Japanese manufacturer’s most capable four-cylinder was the CA18DET. As the name implies, it was a 1.8-liter turbocharged mill, the latest, most performance-oriented version of the CA family which was in production since 1982. As the decade was drawing to a close, the motor had reached the limit of its stock power potential, but more importantly, it couldn’t keep up with the stringent emission regulations without a serious overhaul.

Management decided that developing a new motor was a far more cost-effective alternative, so the SR20DET was born. Like the famous RB26DETT, this new 2.0-liter, four-cylinder debuted in 1989. However, unlike its inline-six sibling, it was transversally mounted inside the engine bay of the Bluebird 2000 SSS Attesa Limited.

While the old CA18DET it eventually replaced had a cast-iron block, the SR20 got a lighter, closed-deck aluminum unit conceived with bombproof reliability in mind. The bore and stroke stood at 86 x 86 mm (3.39 in), a square design that favored a balanced delivery of both power and torque.

Inside the block, engineers fitted a fully counterweighted, forged steel crankshaft along with sturdy conrods and coated pistons that reciprocated inside cast iron cylinder sleeves.

The aluminum, dual overhead camshaft (DOHC) cylinder head featured crossflow, pentroof combustion chambers with four valves per cylinder. Under the red valve cover (black in newer, VTC versions), the cams were given fairly aggressive profiles, and they actuated each set of valves using low-friction, Y-shaped rocker arms with hydraulic lifters. Since the main goals of this unit were reliability and superior power delivery, both cam gears were driven by a single roller timing chain.

In 1990, Nissan decided that the unit was good enough for the company's motorsport endeavors when the GTI-R Pulsar (known as Sunny in Europe) was introduced. Based on the chassis of the mundane three-door hatchback and powered by a unique variant of the SR20DET (54C), it was a 4WD, 227-hp pocket rocket developed for WRC (World Rally Championship) homologation.

It entered the Group A championship in 1991 and 1992, but the results were modest, to say the least. For the 1992 season, the manufacturer also developed a couple of Group N cars which managed to finish first and second in the final standings of the FIA PWRC (Championship Cup for Drivers of Production Cars), a support series for the WRC.

But, rallying aside, the SR20DET reached legendary status thanks to drifting. It all began in 1991 when the engine was finally mounted longitudinally on a proper RWD sports car chassis: the S13. With only minor changes from the original 1989 unit, it replaced the intercooled CA18DET on the JDM K-trim Silvia and the 180SX fastback coupe. Output stood at 205 hp and 203 lb-ft (275 Nm) of torque, which was enough to easily slide both cars’ rear ends.

These two drift-friendly models became the weapons of choice for enthusiasts of this awesome (and illegal) driving technique which was more of a lifestyle in Japan at the time. The four-cylinder under their hoods proved more than durable for the rigors of drifting, even in stock form. As the years went by, a huge variety of aftermarket upgrades became available, and the true power potential of this impressive engine was revealed. Without altering the internals and just a few bolt-on mods, 400 horses are easily attainable.

Of course, some speed addicts pushed it even further by boring the block, swapping out the stock internals, and fitting a bigger turbocharger or even a twin-turbo kit. Such complex tuning unleashed astonishing output figures that stood between 1,000 to 2,000 hp. Yes, you read that correctly; there are 2,000-hp, drag-oriented SR20 builds out there. But don’t just take my word for it. You can watch the story of one in the video below posted on YouTube by That Racing Channel.

Getting back to drifting, the Silvia and 180SX equipped with this engine became some of the most popular cars among enthusiasts, as the illegal practice was emerging from the underground scene and becoming a global sport during the 1990s and 2000s. Moreover, because of its near-limitless power potential and ability to endure a lot of punishment, the SR20DET has become a common swap in various drift builds, predominantly the US-spec 240SX, which was only available with either the naturally aspirated single-cam KA24E or dual-cam KA24DE.

Excellent in stock form and downright epic when properly tuned, the SR20DET is one of Nissan’s masterpieces and, without a doubt, one of the greatest four-cylinders ever built. 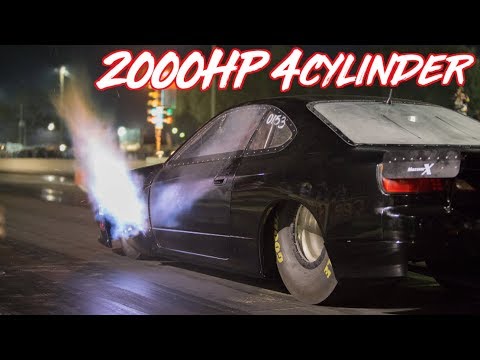