The "Fast and Furious" series might not count among the greatest cinematic works of art, but it's probably the go-to name for an entire generation - if not several - when it comes to car-centric movies.

It essentially did the same thing for movies as the "Need for Speed" series did for arcade driving video games, and if someone tells the fact the "Underground" edition of the latter came two years after the premiere of Rob Cohen's original film is a coincidence, we can't guarantee one of our eyebrows won't shoot through the roof.

EA capitalized massively on the success of the film by giving everyone the chance of driving the cars they saw in the movie, not to mention customizing their appearance however they saw fit. For most, that was the closest they got to tearing it up in a Supra or a Skyline, but it turns out some people are luckier than others.

You could already call AutoTopNL's Max a lucky man considering how he's constantly taking fast cars out on the Autobahn, but not one minute into this video and you can tell driving this particular Nissan Skyline R34 is a special occasion for him.

Having grown up with the "Fast" saga, Max has a soft spot for anything related to that universe, and this Skyline makes no secret of the car it's trying to copy. However, don't call it a replica of Paul Walker's R34 from "2 Fast 2 Furious" because it doesn't try to be anything more than just a tribute. A pretty fast, gloriously sounding tribute.

It didn't even start life as a GT-R: it's actually a GTT converted into a GT-R after it had its RB25 engine replaced with an RB26. Thanks to a series of modifications (bigger turbochargers, new intercooler, a remap, and bigger injectors), the legendary twin-turbocharged straight-six now makes about 450 hp and 369 lb-ft (500 Nm) of torque.

By today's standards, that's top-end non-M BMW 3 Series figures, so pretty underwhelming. But this car was made in 1998, meaning it's more compact and considerably lighter than modern vehicles, so it'll feel completely different. Besides, it's a Paul Walker tribute, so that alone will boost the whole experience substantially.
The interior, on the other hand, will do everything in its power to take away some of the glam of this otherwise quite unique occasion. It looks awful, and to top it all out, it's also poorly maintained (read "filthy"). There are a handful of screwdrivers sitting in the armrest compartment, which isn't exactly confidence-inspiring, and the gear shifter bangs against the ashtray when the odd gears are engaged. Still, you won't hear Max complaining, and we suspect a lot of people would do the same in his position.

After a few passes through an agonizingly short tunnel to enjoy the sound of the engine and exhaust combo, the Skyline reaches the Autobahn for the mandatory acceleration run. Instead of going all the way (though he does hit 168 mph / 270 km/h), Max focuses on a few 62-124 mph (100 to 200 km/h) runs, which was probably a wise choice.

You can see him shifting rather conservatively, with at least 2,000 rpm left until the red zone, which is probably his way of showing the respected a car of this age deserves, particularly one that's been modified extensively (apart from the engine, it also received a manual transmission to replace the original automatic).

Driving a car like this would probably be the automotive highlight for 99.9 percent of the population holding a driver's license, so we're actually grateful for the occasion to share this experience, even if only through the medium of a display. Still, if there's any justice in this world, that interior needs to get a serious revamp. 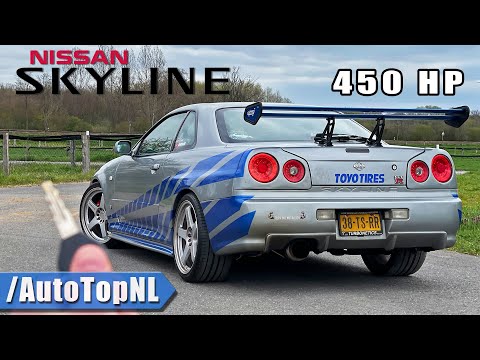