What is Godzilla’s biggest enemy? Well, another Godzilla, especially after the latest movie featuring the mighty lizard showed us how the monster can beat the hell out of two MUTOs. But we’re talking about cars here, more exactly the Nissan Skyline R34 GT-R R34 and the current R35 GT-R.
1 photo
The internal nomination code might have changed, but the DNA code has not, even if modern times are the Nissan R35 GT-R’s cradle. Nissan took a quantum leap in terms of technology and state-of-the-art systems to come up with the ongoing GT-R - which is basically a computer on wheels - but this doesn’t mean the old should be forgotten.

The older Godzilla might be a suitable car to keep behind a glass wall or in a hidden garage, but Nissan packed the sports car with 280 HP at that time which is by no means just another fish in the sea.

But as progress can be measured only by comparing two entities, Car Throttle took the two automotive legends and made them go head to head on the race track. There’s a lot of sugar coating on such an initiative, especially for petrolheads but the icing is even better, because Car Throttle’s video includes drag races, slalom courses and braking tests.

We all know how the current R35 GT-R managed to scare the crap out of some big-name supercars and put to shame a lot of cocky pseudo-drivers that thought their Italian car was better, but can it do the same with his father? 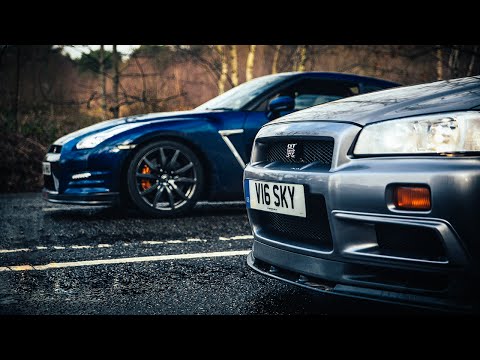