1 Hot Wheels RLC Exclusive R34 GT-R Coming Up, You'll Be Lucky if You Can Get One

5 Watch an Audi S2 Hit 62 MPH Faster Than You Can Say It Has 1,000 Horsepower
Car video reviews:
Coverstory

If you lived out your childhood in the '90s, chances are that your favorite cars belong to that decade as well. And there were plenty of cool vehicles built during those years. Japan had the R32 GT-R, the fourth-generation Supra, the FD RX-7, and the first five generations of the Lancer Evo. Meanwhile, Germany took pride in the 964 and 993 Turbo, the M3 E36, and several Audi S and RS models.
17 photos

We often see the R32 Skyline GT-R compared to other generations of the Skyline or its usual Japanese competitors. But when was the last time you've seen one going up against an older Audi sports car? The Audi S2 happens to be the first-ever Audi S series vehicle.

It came out a few years before the RS2 was launched. Using a 2,2-liter inline-five engine, S2 drivers had access to about 220-hp give or take. Reportedly, less than 10,000 units were made. The four-door Sedan is probably the rarest one, while the Coupe version is the most common.

But the two vehicles that are about to go head-to-head down the quarter-mile (402 meters) in the following video are nowhere near stock. Billy's 1994 GT-R is now up to 650-hp, thanks to a fully-forged engine and a Borg Warner S3625SX-E Twin-Scroll turbo among other things.

With AWD at hand and an R33 GT-R manual gearbox inside, this should be one fast piece of Japanese engineering. The man driving the S2 is Audrius, and he also has access to 650-hp with the help of a custom-built GTX3582R turbo kit.

Of course, the S2 also has the benefit of AWD. But it might seem strange to some of you that it's now running an Audi 1.9 TDI six-speed manual transmission. The Audi is off to an impressive start for the first run, while the GT-R is left with no chance of regaining the lead.

Whether it's all down to the tires or the type of AWD system implied, Billy just can't seem to get in front of his opponent. While the S2 doesn't look as fierce as the R32 GT-R does, this race is all about who can cross the finish line first.

Quattro power helps Audrius go from a standstill to 60 mph (96 kph) in just 3.19 seconds. With 650-hp on tap, it crosses the finish line just 11.24 seconds after the start of the race. The Nissan is no slouch either, but a time of 12.66 seconds is not enough to secure a win. After losing the first challenge of the day, Billy is left with one last hope: the rolling race.

And he makes a spectacular comeback on the third run of the day, although the gap was minimal. His reaction time isn't as good for the next run, so it's all down to the last race of the day. We won't spoil the outcome for you, but you should expect to see a photo finish! 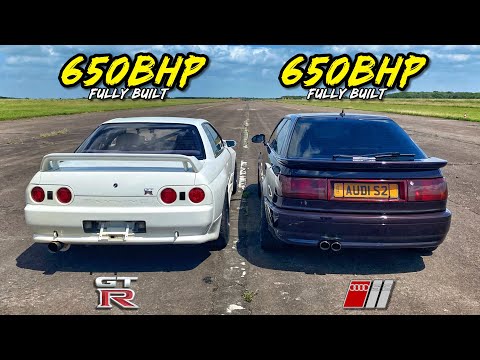