1 2023 Nissan Z Heading to Australia Next Year, but Not as a Tourist

Nissan recently unveiled its new intelligent factory at the Tochigi Plant in Japan, which is going to use robots to manufacture next-gen cars, including its all-new Ariya crossover EV.
15 photos

An aging society, unforeseen situations caused by climate change, conventional labor that is too intensive, and an equally serious labor shortage caused by the global health crisis. All of these have led Nissan to the initiative of switching to more innovative manufacturing technologies. Its recently unveiled production line at the Tochigi Plant plans to roll out a new generation of high-quality, carbon-neutral vehicles built mostly by robots.

Combustion cars, e-Power, and electric models will all be built at the same assembly line.

Nissan’s decision to switch to a more automated manufacturing process is also part of the automaker’s goal of achieving carbon neutrality by 2050. By then, the carmaker plans to fully electrify its plants’ equipment and use electricity that is only generated from renewable energy sources or onsite fuel cells that use alternative fuels.

The Nissan Intelligent Factory initiative will expand globally over time, with the company’s master technicians teaching their skills to robots so they can focus on other areas of expertise that can’t be automated.

Multiple powertrain components will now be batch-mounted from a pallet. Robots will undertake the tightening and alignment of suspension links and will be in charge of the installation of soft parts and paint inspection.

Eleven robots will inspect the body and bumper, achieving 100 percent detection of dust and debris. The results will be checked by employees via smartphone. New water-based paint will allow for the bodies and bumpers to be painted and baked together, reducing energy consumption by 25 percent.

Giant robotic arms equipped with cameras will be able to analyze the cars from every angle, looking for even the tiniest flaw. 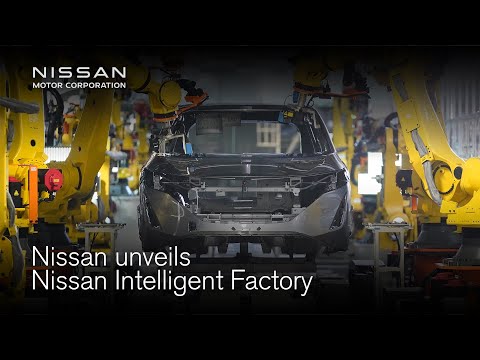