Most plug in hybrids and electric vehicles are coming with an Electric Vehicle Supply Equipment (EVSE); it’s that brick with two cables attached to it that you plug to your car and an electric outlet if a specially designed charger is not around. That “brick-on-a-rope” is quite expensive and unfortunately it’s pretty easy to steal if you’re not careful.
1 photo
A Nissan Leaf owner from Quebec discovered that the cable’s locking mechanism designed to prevent the car from being unplugged don’t actually back up as an anti-theft device.

About a week earlier, Mr. Francois Viau left his Leaf charging at work using the EVSE only to return and find out someone had stolen the cable. He couldn’t understand at the moment how could the system be bypassed since it’s using a sliding tab that goes across the J1772 inlet to prevent the latch from being disconnected.

As you’ll see in the video bellow, further researching concluded that even a kid using a hair comb can open the sliding tab and remove the charging gun from its socket in about 6 seconds. In fact, it can be done with any slender tool.

According to a report on Transport Evolved, Nissan said the charge lock feature on the Nissan Leaf is not intended to prevent the theft of the charging cordset, but to prevent it from being disconnected during charging. For those who want extra safety, there’s a small hole in the release button through which users can insert a padlock. 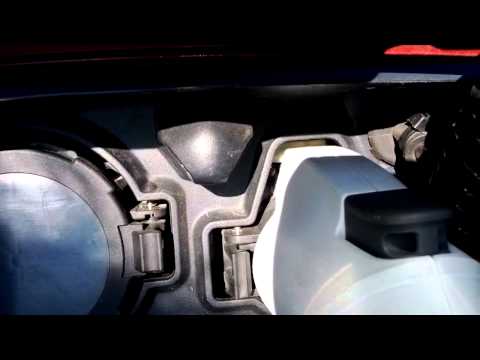