Is the new Nissan GT-R capable of defeating a 22,000 HP jet fighter aircraft in a drag race? Believe it or not, it is! At least as long as both the plane and the vehicle keep their wheels on the ground.
1 photo
Though the GT-R’s output of 550 HP and 463 lb-ft of torque (627 Nm) seems rather embarrassing when compared to the 22,000 horses that power the Hawker Hunter, it’s more than enough to get the Japanese sportscar up to 62 mph (100 km/h) in just 2.7 seconds.

The unusual race took place in Switzerland and was “assembled” by Nissan Germany for “N_Magazine”. The publication is entirely dedicated to the Japanese automaker’s customers so it’s more than natural to think that the drag duel was considered for promotional purposes.

Already available in Europe, the 2013 Nissan GT-R will hit the United States later this year, so all you folks over the Pond will have to settle for this awesome video for the time being. 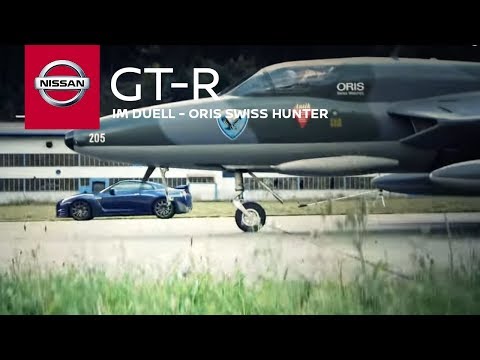