Nissan will face gruelling competition this year in Le Mans, having to face adversaries like Audi, Porsche and Toyota. Besides that, they plan on facing them off with a front-wheel drive prototype with a weird shape. But that shape is all about aerodynamics, according to Nissan.
1 photo
They also say the GT-R LM Nismo racer looks like a Batmobile, which is not really true unless you flip the car upside down. But the shape of the car is weird, we'll agree on that. Also, it has a precise purpose.

You'd initially think they've gone mental, trying to win the Le Mans 24 Hours Race with a front-engined, FWD LMP1 prototype, but that's until you get to hear their explanations.

To start with, 65 percent of the downforce generated by the car's body kit presses the front axle for extra grip in corners and reduced power loss at the wheels.

The rule is simple here: "the harder you push the tires down into the asphalt, the better they grip the track". Therefore, this is "the best and easiest way to put a massive amount of performance on a race car", as explained by Nismo chief engineer Zack Eakin.

For example, the GT-R LM Nismo prototype can stick itself to the ceiling at 150 mph (241 km/h) and hold itself up by using just the downforce created underneath the car.

Also, the rear of the car is limited from an aerodynamic point of view. Therefore, all the weight was shifted to the front. There are plenty of interesting things to find out about Nissan weird Le Mans racer, but we'll let the experts to the talking below: 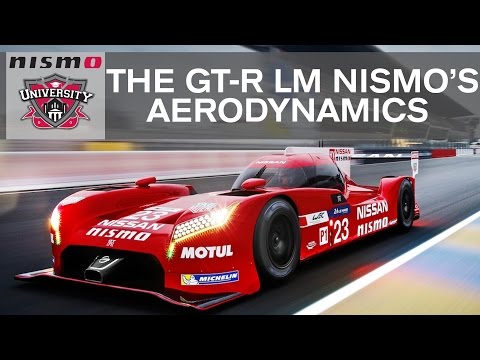