It may take a few more years until Nissan reveals a successor for the GT-R R35. But it may also never happen. Granted, the GT-R has had a good run. One could argue that it has been around for half a century, considering the first iterations. And even if Nissan doesn't bring it back, there are still plenty of these cars around for us to enjoy.
16 photos

The Nissan GT-R R35 was unveiled almost 14 years ago. These days, seeing one that's tuned up to around 1,000 horsepower isn't surprising anymore. Come to think it, cars with that kind of power have become more and more common in our society. Some people even go as far as using these vehicles as daily drivers. And just as you would expect a GT-R to be capable of those performance figures, you shouldn't underestimate AMG owners either.

The only advantage it has is that it's about 220 lbs (100 kg) lighter than the GT-R. And the situation only gets worse for the Mercedes-AMG, as it has to do with just RWD in this quarter-mile (402 meters) race. If the track would have been any longer, things might have been different. But at this point, the Nissan looks like a much safer bet. For the first run, the GT S is off to a poor start. And that's all the GT-R needed to win.

But you know what they say "It ain't over until the fat lady sings." The two contenders line up for a second run. We get to see an improved start for the GT S, but it's still no match for the GT-R. The Nissan manages to dip into the 9s for this run. Even with a more efficient launch, the Mercedes-AMG doesn't manage to cross the finish line in less than 11 seconds. You can't help but wonder if its E-Class counterpart would have done a better job in this race.

For the last test of the day, the GT-R is stripped of its AWD advantage. With a rolling-start procedure, it's time for the GT S to shine. For a second there, Mercedes-AMG fans are going to be full of hope. And then Godzilla will shatter those dreams, crossing the finish line at a speed of 134 mph (216 kph). The gap isn't all that serious, but then again "It doesn't matter if you win by an inch, or by a mile". 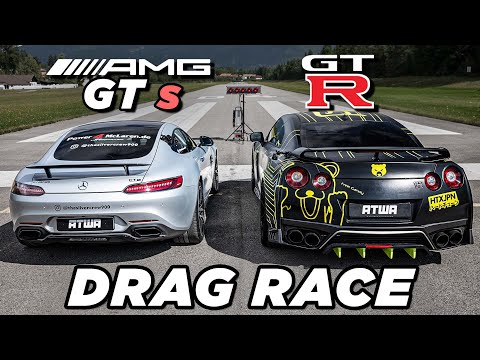