1 Michelin and Porsche Documentary Captures the Essence of Le Mans

5 Watch the Nissan GT-R LM Nismo Gearing Up For Le Mans 2015
Car video reviews:
Up Next

We've seen how Nissan motorsport branch approached preparations for Le Mans in terms of aerodynamics and powertrain for the GT-R LM Nismo prototype, but there's another crucial aspect that needs extra attention when going racing: tires.
1 photo
Aerodynamics and tons of horsepower count for nothing if you can't efficiently transfer them to the asphalt via a set of performance tires. But who are we kidding, Nismo knew that already and had the situation under control from the start, but in a distinctive fashion.

For starters, the biggest difference in tires used for Nissan's LMP1 prototype lies in the small, narrow tires at the back, completely different from any other manufacturer. Because of the car layout - as you remember, the GT-R LM Nismo sends more than 1,250 HP to the front axle - the tires are bespoke, made specifically for this vehicle by Michelin.

To look at the bigger picture for a better comparison, consider that the front tires are 14 inches wide while the rear tires are only 9 inches wide. But that's only natural since 65% of the downforce generated by the LMP1 prototype pushes the front axle.

However, this is the Le Mans 24 Hours Race, which means endurance is on its home turf. Therefore, the tires must also resist as much as possible to the grueling conditions on the track; the more they do that, the less time is wasted at pit stops.

But hear this out: the rear tires have very little wear, according to Nissan engineers, which means the car can go for six or even nine stints on a single pair of rubber.

This is where we stop the spoilers and let the experts do the talking in the video below: 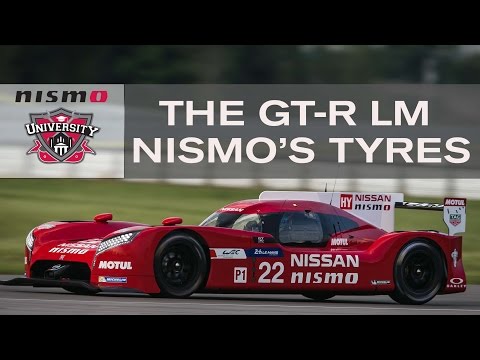