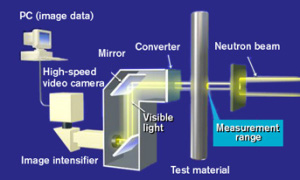 Strange things are happening in Japan. Some Japanese people cooperated with other Japanese people to study engine lubrication. It might sound a little techno-porn more than techno-freak, but this is a world's first.

On November 10th, in Tokyo, Nissan and JAEA (Japan Atomic Energy Agency) announced that they have found a neutron imaging system that can provide precise data to what and where the oil goes in an engine operating at high speed.

They did this by combining neutron radiography to visualize through lightweight metals with advanced imaging technology to capture dynamic events, allowing scientists to study the behavior of oil in an engine or drivetrain.

Using this new... thing, Nissan and JAEA will conduct visualization studies on engines to determine where friction is lost, in order to redesign engines to reduce fuel consumption and CO2 emissions. 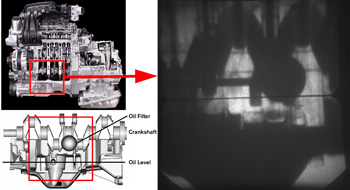 In case you're from another planet or have no auto knowledge, Nissan are the ones responsible for the GTR supercar, the one that blitzed Porsche's 911 turbo at Nurburgring. After that, it decided to trash the 911 gt2 and gt3. Practically, Nissan created a car that destroyed all of Porsche's super cars in a matter of weeks.

It has been called the supercar-killer. Each engine is hand built, which makes it very difficult to realize how much horsepower it chucks out, because each one is different. The GTR's tires are said to be a bit wider than the rims so, under hard cornering, the tires stay on the wheels , and all its ceases and crests are designed to channel the air to that big rear wing giving it its immense stability.

Why have I bothered to tell you all these things? Because if Nissan are working with JAEA, I assume they know what they are doing. They've already proved that with Godzilla.