1 Brie Larson Says the Thrill of Driving Can Still Be Had, Thanks to Nissan

The fully electric Nissan Ariya chose the glamourous French Riviera for its public driving debut while even completing a few laps of the iconic Circuit de Monaco Grand Prix track. This month, it was the venue not just for a Formula 1 race, but also Formula E.
12 photos

Speaking of which, Nissan has named its no. 23 Formula E car after the Ariya for the 2020/2021 season, while the no. 22 car is named after the all-electric Leaf hatchback.

The Ariya is Nissan’s first-ever fully electric crossover coupe model and comes with advanced connectivity, technology, and what the carmaker claims is a “competitive range” of battery capacities to go with its innovative e-4ORCE drivetrain.

“Ariya’s public driving in the streets of Monaco is a great way to witness the capabilities of our e-4ORCE technology. Ariya is the epitome of Nissan’s innovation in electric mobility and this event marks a defining moment in the next chapter of Nissan’s EV journey,” said the carmaker’s AMIEO region VP of product strategy and pricing, Arnaud Charpentier.

As for what U.S. buyers can expect from the Ariya once it lands in dealerships later this year, for starters, they’ll be confronted with four available specifications. The first is an entry-level model with rear-wheel drive and a 215-hp electric motor/65-kWh battery setup. Going up a level means getting an RWD spec with a 90-kWh battery and 239 hp, combining for an estimated range of 379 miles (610 km) on a single charge. 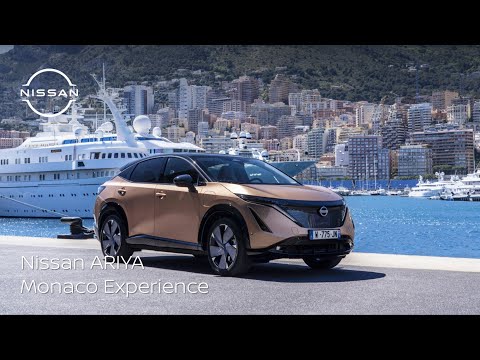