When you think Nimitz-class aircraft carrier, you think of a breed of nuclear-powered, floating weapons platforms that can be deployed in the hottest corners of the globe, and if need be, unleash their immense, destructive air power.
8 photos

The last thing that crosses your mind is of these beasts being gas stations. Yet, from time to time, that’s exactly what they are.

You see, for certification purposes the carriers are equipped with something called FAS rigs. That would be the hardware needed for fueling-at-sea operations, meaning the transfer of fuel between ships.

The idea dates back all the way to the start of the last century, when sailors needed ways to transfer coal. Nowadays, FAS pretty much means shooting lines and hoses from one ship to another using a pneumatic thrower.

As said, these things exist on aircraft carriers, but are mostly used for certification purposes. Nimitz-class USS Carl Vinson (CVN 70), however, went above and beyond, and since the beginning of the year it transferred 1 million gallons (4.55 million liters) of fuel to other Navy vessels.

The milestone was reached in mid-September, when Vinson pulled alongside Ticonderoga-class guided-missile cruiser USS Lake Champlain (CG 57), and pumped 150,000 gallons of fuel into it.

Including the Champlain, the carrier acted as a gas station for no less than nine different ships since the beginning of the year, and conducted 15 FAS operations – that means some of those nine vessels came in for refueling more than once.

The Carl Vinson wears the name of a Georgia congressman, the man behind the Two-Ocean Navy, the largest naval procurement bill in American history. It was launched in 1980 with a displacement of 113,500 tons, a length of 1,092 feet (333 meters), and two nuclear reactors on board.

The beast can carry 90 fixed-wing aircraft and helicopters. It is presently part of its own Carrier Strike Group (VINCSG) which also includes USS Lake Champlain, and Arleigh Burke-class guided-missile destroyer USS Chafee (DDG 90). The group operates as part of the 7th Fleet in the Indo-Pacific region. 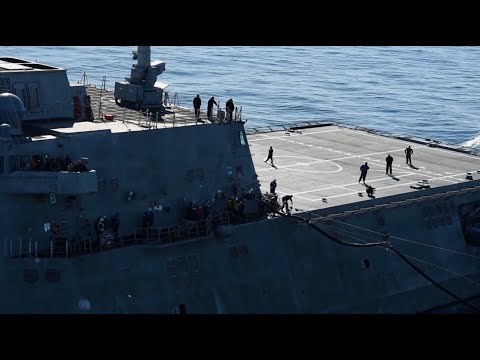