3 How Does One Fail to See a Huge Yellow Road Train Charging Down Your Way?

4 Nikola Motor Unveils the Nikola One Truck, Insists It's on Course to Deliver

5 Nikola Motor Says It Can Make the Model S Travel Longer in a Bizarre Statement
Car video reviews:
Up Next

BMW Z4 Roadster Concept Is Out and Looks Better Than Imagined

Nikola Motor is mainly known for two things: one, it is the company that used Nikola Tesla's other name, the less famous one, because the surname was already taken; and two, it has been threatening us with an electric semi truck for a while now without producing any tangible evidence yet.
7 photos

It also has a proclivity of showing impressive numbers next to its vehicles, despite the fact in some cases this only makes the company look amateurish. Even childish, maybe, especially since its truck was first supposed to have an electric powertrain with a range extender, but in the meantime, it switched to a hydrogen fuel cell setup.

It's this type of inconsistency that casts doubt over Nikola Motor's capabilities to go through with its promises, and it doesn't help when it says it will deliver things that even established names in the industry can't yet achieve.

The electric big rig is not the company's only product, though. Late last year, it has shown the first real images of its Zero electric UTV, a fun-oriented off-road vehicle that was supposed to come with a 72 kWh battery pack and a maximum range of 100-200 miles.

Well, those specs have now been updated, and if you thought they were ridiculous in the first place for this type of a vehicle, listen to this: it turns out the Nikola Zero will come with 415 hp as standard, and 3,675 lb-ft of instant torque (around 5,000 Nm). The upgraded version brings 555 hp and 4,900 lb-ft of twist power (6,643 Nm).

The Zero has four seats, four-wheel-drive, and will reportedly reach 60 mph (97 km/h) in under four seconds for the top version. The company also claims that the base model will cost a purely randomly chosen $35,000. But we haven't gotten to the best part yet.

The previously announced 72 kWh battery pack has now morphed into a 75 kWh one, but the Nikola Zero gets two more options: either 100 kWh or 125 kWh. The latter makes the Nikola Zero the EV with the second largest battery pack after Faraday Future FF91's 130 kWh unit, with the very important mention that both these vehicles are purely hypothetical at this point.

Nikola Motor has also revealed a production plan for what will become its first commercial vehicle, and it's coming sooner than you'd think. The Zero is supposed to be available for test drives at dealerships (?) in December with orders launching in January. Since the UTV is going to be road legal in some states (thanks to an optional package from the manufacturer), there should be plenty of interested parties in the Nikola Zero. Provided it delivers everything it has promised.

Below you'll see an older video showing the UTV in an earlier stage (and with road tires), but the image gallery has renderings showing the alleged production version. We can see it's quite a tall vehicle, most of which is probably due to the large battery pack fitted under the floor. 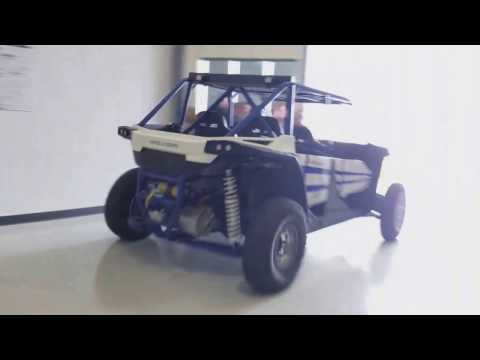