1 The Nikola One Trevor Milton Designed in His Basement, Maybe Bought from Rimac

3 Accused of Lying Itself into the Industry, Nikola Makes Some More Promises

4 Nikola Badger Electric Pickup to Be Made by GM, Ultium Batteries on Deck

It’s been a rough end of the summer for American (still) startup Nikola. Shortly after announcing a partnership with GM for the production of the Badger pickup truck, all hell broke loose as a damaging report was published.
9 photos

Called Hindenburg Research, the paper accused the company’s top brass of deceiving the world about, well, everything. It led to the departure of Nikola’s main man, Trevor Milton, and the rise to power of Stephen Girsky, a former vice president at GM.

With a new exec at the helm, Nikola published on the last day of September a summary of its strategy for the next few years. There’s a lot of fancy talk (all of it in the press release section attached below) about innovative technology, world-class companies, and such, but there are a few promises worth talking about as well.

The biggest one concerns the Tre, an Iveco-based truck that will run on electricity. Powered by Nikola’s electric drivetrain, it should develop 640 hp and provide a range of up to 300 miles (483 km). And it, Nikola says, is already in production.

Over the next few weeks, a facility in Germany is expected to roll out the first batch of five test prototypes, and if everything goes well, we should have the first Tres in customer hands by the end of 2021.

Separately, Nikola is working with Bosch for the creation of a line of “hydrogen fuel-cell powered semi-trucks for the medium- and long-haul trucking sectors.” In this case, the timeline calls for the first tests to be conducted in the first half of 2022.

Aside from its pursuit of products for the trucking industry and the Badger pickup, Nikola also plans to develop a network of hydrogen fueling stations, and also electric vehicle solutions for outdoor recreational applications.

At the time of writing, Nikola’s stock is on an upward trend, selling for $20.48. 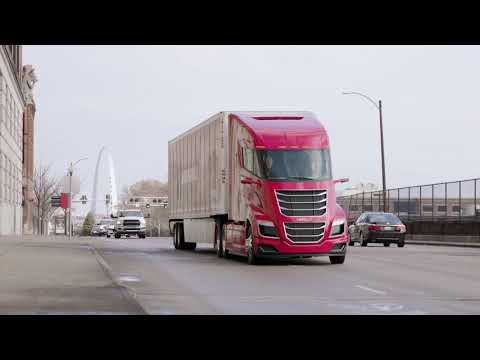