1 Nick Bollea Gets out Early for Good Behavior

2 Hulk's Family Feud
Up Next 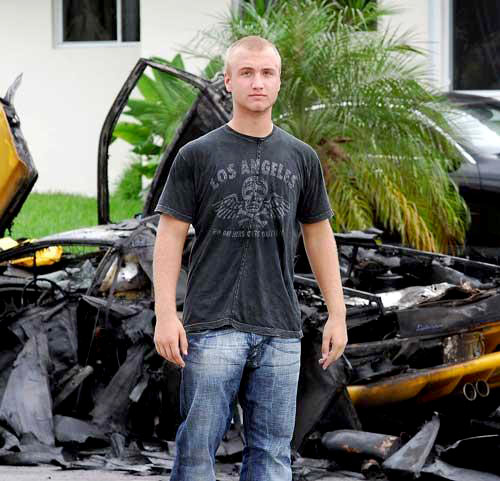 It's good to be on the outside – the outside of prison bars that is. Nick Hogan, son of former wrestler Hulk Hogan has just gotten out of jail recently after last year he managed to crash his Toyota Supra and put one of his best friends in a vegetative state while drag racing.

He was spotted with his former-famous dad around Las Vegas, probably on his way to the famous SEMA show. It's a known fact that the little Hogan is a big fan of car customization, which ironically got him into trouble into the place (actually drinking and driving got him into trouble).

The dynamic duo was seen outside the Hard Rock Hotel and Casino in an attempt to look inconspicuous. Rumors have it that this is kinda of a treat for the former inmate (daddy must be so proud!) and they are booked in the hotel until Friday.

There is also talk that daddy took extra measure to ensure that Nick doesn't get into trouble by getting a room right next to his VIP executive suite. As for the man who was seen lurking around with the Hogans, people think that he might be Nick's parole officer. Guess he's just along for the ride.

For those who don't remember, Nick Hogan recently came out of jail after spending 166 days for a reckless driving charge that left his friend John Graziano critically injured. So maybe taking your son to a tuned car show isn't the best idea in the world Hulk!

But then again, the Hulkster has gone on Larry King Live to say that “There are no accidents, God has a plan that unfolds just as he wants it”. Basically, that's saying Nick is not to blame for the accident, but a higher power that wanted to leave a poor kid brain dead for the rest of his life.