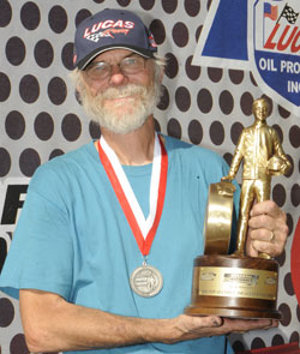 60-year old Top Alcohol driver Mark Niver was killed this Sunday in a crash at the Pacific Raceways, during the NHRA Northwest Nationals, after his dragster ran off the end of the racetrack and crashed into the netting. Niver's death marks the second driver killed at an event this season and third person killed at an NHRA event.

The cause of the accident is not yet known, with authorities still looking into what happened. What is known is that Niver's parachutes failed to work at the finish line, while he was doing 271 mph (436 km/h). The dragster crashed in the shutdown area during eliminations for the event and buckled when it hit the netting.

Although emergency personnel on site jumped to help the injured driver, Niver succumbed to his wounds moments later. The crash prompted a sheriff to shut down the event at 4:15 p.m. PT before the final round.

"NHRA and Pacific Raceways officials extend their deepest sympathies to the entire Niver family,'' the NHRA said in a statement.

Niver was quite the NHRA figure, as not only did he drive, but also built his dragsters. He started out during the Pro Comp era in the 1970s and liked to drive blown alcohol and injected nitro engines. He won the 2003 Division 7 event in Tucson, Arizona, and two more Lucas Oil Drag Racing Series events, the most recent of which being the Tucson event in 2006.

As said, Niver is the third person killed in an NHRA event this year. Neil Parker, 58, was killed in an Alcohol Funny Car on June 14, while a spectator was hit and killed by a tire from a crashed car in Arizona.