5 NASCAR Reveals New Nominees for the Hall of Fame Class of 2023
Car video reviews:
Up Next

Before giving its next-generation race car their seal of approval, NASCAR partnered with AB Dynamics to conduct a driverless on-track crash test at the Talladega Superspeedway, where the vehicle was slammed into the banking wall at 130 mph (209 kph) by three driving robots, one for steering, one for operating the pedals and one for shifting gears.
6 photos

The goal was to gauge the overall safety of the vehicle and see how a collision might affect the driver in this type of crash – of course, they used a crash test dummy fitted with sensors instead of a real person.

“The challenge was trying to get this extremely complex machine to do a very precise test without a human driver piloting the car,” explained AB Dynamics exec Craig Hoyt.

“A major hurdle NASCAR faced was finding a crash test facility which could conduct such high-speed crash testing. AB Dynamics robots allowed NASCAR to use a fully running race car and conduct the test at a real race track, at real race speeds. There is no better data than replicating crash tests in a real environment and our robots enable us to do that accurately and repeatedly.”

The main requirement was to drive the car at 130 mph towards a precise impact point into the SAFER (Steel and Foam Energy Reduction) barrier, hitting it at an angle of 24 degrees. The vehicle was then fitted with steering, shifting and pedal-working robots, capable of using pre-recorded driving information and geometric GPS data to navigate.

These clever little software-based entities drove the car into the wall at precisely 130.015 mph (209.238 kph), within just 1 degree of the prescribed angle. AB Dynamics used its SR60 robot for steering, while CBAR600 worked the pedals, and a special Gearshift Robot was used for changing gears.

Neither robot required any major modifications in order to fit in the vehicle and none interfered with the actual positioning of the crash test dummy.

“The data we obtained from the test was extremely important and was not possible to get from any crash test facilities at the time. The test provided valuable information for correlation with our computer crash simulations and confirmed that the predicted vehicle impact performance from the simulation was duplicated in this real-world crash test,” said NASCAR safety engineering managing director, John Patalak. 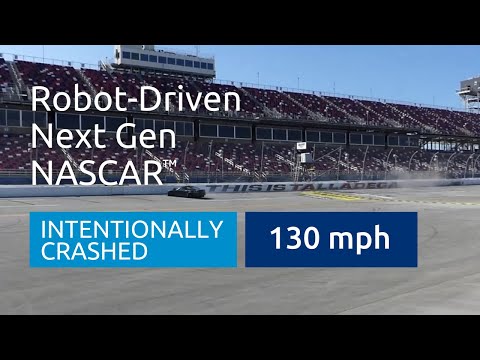