This Is Arguably the Coolest V12 Ever Created, the GMA T.50’s Cosworth Engine

Newest 'Grizzly” E-bike Trumps All Others with AWD, Massive Power, and Speed

Cristian Curmei
With the way things are going, it won’t be long before e-bike turn into something bigger, stronger, and no longer recognizable to their ancestors. Actually, that moment has already arrived. And Ariel Rider is the team to bring forth this transition.
11 photos

What we see in the cover photo is something, because I haven’t quite found a category for it, known as the Grizzly. Its creators call it an e-bike. But to call it that is sort of an understatement. You’ll understand why after you read on.

Now, it may not seem like an e-bike at first, but once you take a closer look at it, you see that it is, it just isn’t very traditional. The frame, although it is made from traditional tubes, looks more to be shaped like a really stripped-down café racer. I'm just taking about the overall shaper it creates for your eye.

For example, on a traditional bike, the top tube would usually end once it hits the seat tube. On the Grizzly two things happen. First, the top tube turns downward under the seat and continues to also shape part of the seat-stay, and secondly, the seat is supported on a frame in which you place one of the batteries. Yes, one of the two. Hold you horses, we’ll get there.

This frame we see is also composed of 6061 aluminum so it should be light enough, yet strong enough to carry all of what is on this bike. O.k. I won’t drag this out any further and just spill the beans. First off, this e-bike includes AWD, or as some folks call it 2x2. Each wheel includes two massive 750W custom geared brushless motors. What's not clear, however, is whether the 80Nm of torque mentioned by Ariel is for each motor or a total. But at a 105lbs (47kg), which the bike weighs, then 80Nm will only be enough to barely get you moving. But with a 33-mph (53kph) top speed, it’s clear what sort of power these two motors put out.

Now for those two batteries. Don’t lose your breakfast or whatever this next phrase catching you eating, but the Grizzly is juiced up as follows. One 52V 17.5Ah and another 52V 14Ah battery with Samsung lithium-ion cells rated for 800 charge cycles are housed in the downtube and under the seat. However, equipped to this powerhouse, is a set of controllers with 52V and 750W each. And. And! All of it good enough for 60 miles (96km) of riding!

What the actual...? That's insane. Honestly, the only reason this e-bike is still considered an e-bike is because of the other less capable components it includes in comparison to a scooter, moped, or motorcycle. Heck, there’s even an option for a seat that allows for another rider.

As for a suspension system, we just know that there is a front fork and rear CNC milled shocks with no mention of travel. Oh, and braking is a set of Tektro 180mm rotors with dual piston calipers from the Tektro Dorado line.

But as I said, due to other components like the KMC Z7 bike chain and Shimano derailleur, this e-bike stays in the e-bike category. Until some other manufacturer or even Ariel Rider, comes along with a beefier design. Where’s the limit? Check out the video below to see how close we are to that limit. 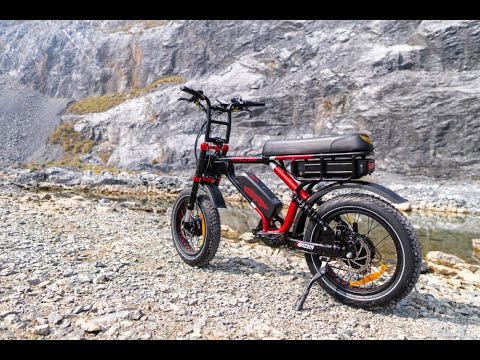