Ionut Ungureanu
Whether or not they are entirely safe is still up for debate, but one thing is clear: the Polaris Slingshot is lots of fun. Wealthy college boys buy them; rappers tune them, and sportsmen turn them into high-notch toys. We’ve seen a lot of these three-wheelers getting mad aftermarket enhancements, but the one in question clearly is noteworthy.
7 photos

The 2015 Polaris Slingshot has a 2384 cc displacement, with a 5-speed manual transmission. Weighing in at 1743 lbs (791 kg), it's powered by a 2.4-liter inline four engine derived from the GM Ecotec system. You may have heard of these numbers before, but did you know this exact outputs used to be installed in the Pontiac Solstice and Saturn Sky sportscars? Yep, we’re looking at a three-wheeler that is commanded by an older generation sports engine.

While the standard model has two 17’’ front wheels and a singular 18’’ wheel in the rear of the vehicle, the enhanced issues (SL and SL LE Edtion) come with two 18’’ forged aluminum front wheels with a 20’’ rear wheel. But that is not enough for the happy owner of this particular Slingshot, since the boys over at the Auto Firm have installed custom rims.

It appears that they commissioned baseball star Yoenis Cespedes for the design, as the New York Mets star is one of the VIP customers of the shop. Whether or not the three-wheeler belongs to him, we don’t know, but we find the result quite impressive. Just look at those smooth LED lights and the way you can change their colors with a special remote control. Not to mention the Wi-Fi spot or the bomber sound system they’ve installed.

In terms of colors, we can’t find a better nuance of blue to match the black finish. Last but not least, the Avorza air ride suspension. Dr. Dre may have set the pace back in the day when Cadillac Bel Air was the gig in the hood, but this thing rather looks like a spacecraft with wheels, to be honest.

On a scale from one to ten, how much do you think this tuned-up vehicle deserves? 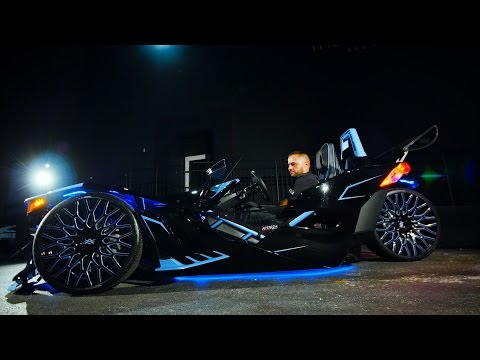