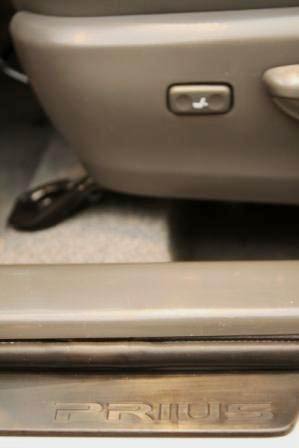 Some mastermind down at Toyota thought up this promotional campaign and now they have to stick with it, but it's more than certain that the person is fired by now. Anyways, here's yet another photo teaser, detailing one of the marvelous features of the Toyota Prius.

Hold on to your seats folks, this one is a doozey, it's a seat adjustment button! How very 80s of them! That means that people who will purchase the 2010 Toyota Prius will be able slide their seats into the most comfortable position. Someone get us the number of an advertising agency stat! We've got a few ideas of our own for a market strategy and they include a gas cap, a window wiper and a pair of fuzzy dice hanging on the rearview mirror (although that might be a bit too aftermarket).

We're going to leave out the fact that the new Prius has been spotted and photographed on numerous occasions. Still, it's a bloody mystery as to why Toyota refuse to show us the damn car already, and instead continue this hide-and-seek game that has a bit of voyeurism added to it.

The likeliest chance they'll take the wraps off this project will be at the Detroit Auto Show in January. Until then, keep expecting these “interesting” photos, at the rate of about one every week. Other pictures included a camera lens, probably for backing up, a shot of the dashboard from the side, the front end and a mysterious Open/Close switch, the kind they have on public toilets.

Maybe they'll show a picture of the brake pedal next week, from the side too, to make it more artsy and intriguing. But leaving all things aside, this is one hell of a way to make modern art. Some of the photos would make millions hanging on the walls of Tate gallery.