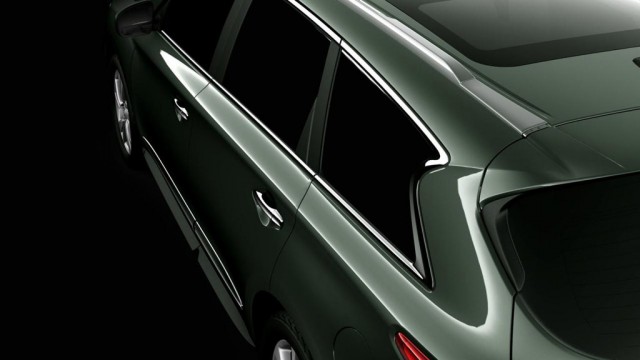 No, we aren’t talking about a new generation of Jaguar XJ saloon, but Infiniti’s contender to the luxury crossover market. This is the latest piece of the puzzle from the Japanese carmaker and it covers the seven-seater’s side. We’d say the C pillar looks a bit like Lexus’ SUV, but that last kink at the very top definitely ads spice to the rear end.

The last teasers showed us a headlight, front fascia and the wheel, plus the tail lamp and its side, which are broken up by a wavy belt line, all following the Japanese carmaker’s current design language. Now, this little summer teaser is meant to draw attention to the new JX crossover, before it gets revealed in full production form at this year’s Pebble Beach Concours d’Elegance in August before a production model debuts at the Los Angeles Auto Show in November.

The JX is expected to sit in the range between the FX and the eight-seater QX. It will offer three rows and room for seven adults. When it comes to market next year, it will have to be pitted against strong competition from German rivals like the Mercedes Benz GL-Klasse, Audi Q7 and even the Lincoln MKT in the US market.

Under its “Power of 7” campaign, Infiniti will release one new teaser every week via its Facebook page for seven weeks, leading up to the big debut at Pebble Beach.

"Families don't have many luxury vehicle options today. The new Infiniti JX will be the 7-passenger antidote to the ho-hum luxury crossovers that are out there right now," said Ben Poore, vice president of Infiniti Americas.