4 Welcome to Porsche's Secret Lair, Where You'll Find About 500 of Its Rarest Cars

Home > News > Car Profile
Andrei Tutu
The virtues of the future 992-generation Porsche 911 GT3 RS spread beyond the world of Porschephiles. For one, the track-savvy Neunelfer will continue to carry the natural aspiration torch. And we can now listen to the growl of the atmospheric flat-six occupying the posterior of the machine.
6 photos

The first 922 GT3 RS prototypes were spotted back in August, but with test cars having hit the Nurburgring this week, we have fresh spy footage.

And, since the high-revving soundtrack of the vehicle is music to our ears, we've brought along not one, but two spy clips showcasing the model doing its testing thing on the Green Hell (lens tip to YT labels Automotive Mike and statesidesupercars).

The non-RS 992 GT3, which is expected to make its debut by mid-2021, should be powered by an N/A boxer delivering at least 500 ponies. And the Rennsport model will obviously dial things up a notch. So, while the displacement might remain unchanged, we should receive at least a 20 hp premium, along with an even fiercer experience.

However, while the GT3 will once again let buyers choose between a manual gearbox and a PDK dual-clutch (this time around, the tranny choice won't be related to the "standard" or Touring body styles), the lap time duties of the RS model mean this will skip the stick shift.

How do we explain the super-sized wing on the back of this test car? Well, as prototypes of the 992 GT3 have shown, the generation change brings a massive aero update. So, while the wing of the upcoming GT3 rivals that of the retiring 991.2 GT3 RS, the next 3RS will sport a swan neck wing that's on par with the hardware on the 911 GT3 Cup racecar.

The Rennsport treatment will also involve a noticeable weight reduction, while all the hardware of the vehicle will be aimed at delivering a leaner driving experience. 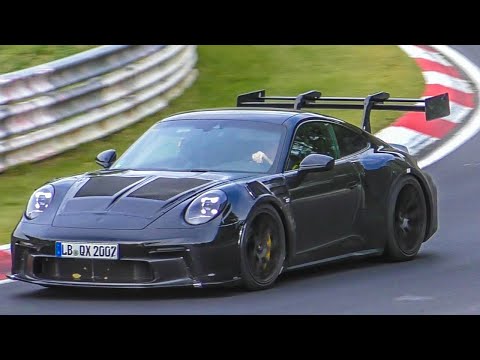