4 Ferrari vs Lamborghini vs Porsche in $1 Million Drag Race, Italians Get Trampled

After the discontinuation of the Carrera RS with the 993 generation, the GT3 became the driver’s Porsche 911 starting with the 996 generation. The Stuttgart-based automaker continues to improve the breed every few years, and the current model arguably is the best one yet.
10 photos

The list of changes over the 991 includes double wishbones up front, a motorsport-inspired rear wing for more downforce, and a striking aerodynamic diffuser that wouldn’t look out of place on the 911 RSR. Closely related to the 911 GT3 Cup, the 4.0-liter boxer is a free-breathing marvel of engineering that’s capable of hitting 9,000 revolutions per minute.

Drivers who prize the act of driving more than lap times are offered a six-speed manual transmission whereas track-focused customers have a fast-shifting PDK. The latter is heavier, that’s for certain, but not by much at 1,435 kilograms (3,164 pounds) compared to 1,418 kilos or 3,126 pounds.

Although it’s been specifically engineering for cornering, the 992 GT3 has to show its worth over the 991 GT3 in a drag race according to Mat Watson. The gentleman behind the Carwow YouTube channel decided on 991 GT3 RS to make things just a little harder for the newcomer, and obviously enough, the standing 1/4-mile ends rather predictably in my honest opinion.

Rated at 503 horsepower and 347 pound-feet (470 Nm) of torque at 6,100 revs, the 992 GT3 can’t hope to win against the more potent sibling. The 991 GT3 RS cranks out 513 horsepower while torque comes a little bit earlier at 6,000 rpm. The Weissach go-faster package also lightens the car to 1,430 kilograms (3,153 pounds), and the magnesium rims help a whole lot in terms of acceleration because they reduce the car’s unsprung weight.

On the first run, the 991 launches hard and keeps getting away from the 992 despite stuttering its gear change from second to third. Second time out, pretty much the same thing happens although the gear changes are slightly crisper. The 991 crosses the line in 11.3 seconds while the 992 follows closely behind with an elapsed time of 11.5 seconds. Be that as it may, we should remember that Mat has previously managed 10.85 seconds in the 992 with warmer tires on a racetrack instead of a runway on a cloudy day. 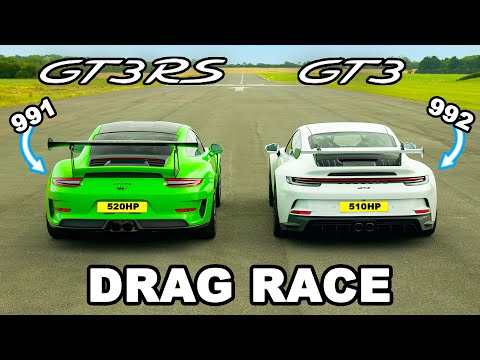