New Land Rover Defender Breaks Down After Only 167 Miles

Mircea Panait
The Fast Lane has recently purchased “a long-term Defender” from Land Rover in the United States, but disaster struck 48 hours after taking delivery. Two days and 167 miles, to be more precise, which goes to show that Land Rover’s reputation for bad reliability isn’t based on rumors.
90 photos

What’s most surprising about the Defender we’ll talk about today is that TFL didn’t even load it up with options that would add unwanted complexity to the already unreliable vehicle. From a base price of $49,900 excluding destination charge, their gentle giant was optioned to the tune of $56k.

One day after taking delivery, The Fast Lane took the four-cylinder turbocharged SUV to the Webster Pass in Colorado for a bit of off-road fun. “The vehicle did really well” with the bone-stock tires, then the guys went to Keystone in Summit County to have dinner after they had their fun.

Fed, hydrated, and ready for the drive home, The Fast Lane couldn’t believe to see the check engine light not going away after starting the car. With the help of an OBD II reader and a mobile phone, Tommy and Roman Mica found a disparity in the air-to-fuel ratio for cylinders number two and three.

After taking the Defender to the dealership on Friday, everything was fine on Tuesday when Andre was supposed to bring it back. “He noticed that none of those really funky and cool cameras that we fell in love with so much were working.” At the dealership once again, the service technician found out that the camera module wasn’t functioning as intended.

Even with the help of a Land Rover engineer, they just couldn’t fix the damn thing. As such, The Fast Lane is waiting for the module to be replaced. On the phone with the dealer, Roman got another piece of bad news.

“When can I pick up the vehicle?” he asked, to which the service rep replied that he can’t because “the check engine light is back on." The engineer decided that it needs new injector coils, wires, and injectors, and on that bombshell, do you still want that Defender in your driveway? 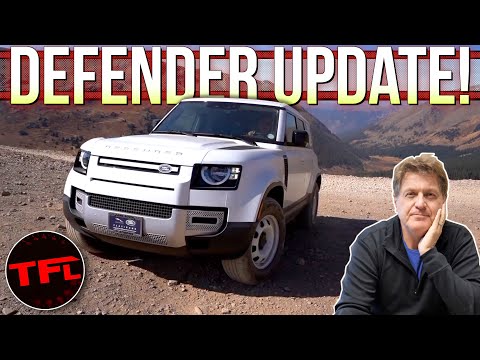