2 Lamborghini Urus STO Feels a Digital Need for V10 Power, Would Tear Up Any Track

A new Lamborghini Huracan is coming up for 2023, and it's somewhere in between the Evo RWD and the STO. It won't be cheap, but then again, which Lamborghini is? The Italian supercar has recently completed a European tour, coming in contact with over 750 potential customers and guests. We've all seen the specs, but we haven't yet seen it in its all-out splendor.
7 photos

The predecessor of the Huracan had a lifespan of 10 years. More than 14,000 Gallardos were built during those years, and it still is one of the best-selling Lamborghinis of all time. Now, the Huracan made its debut at the 2014 Geneva Auto Show.

Earlier this year, the Italian supercar manufacturer announced that the 20,000 units had rolled off the assembly line. Still, looking at the life span of the Gallardo, we can't help but wonder if we're going to get a replacement for the V10 supercar within the next two or three years.

Lamborghini has been very smart about the Huracan so far. Every few years, they have refined the car, delivering an updated product. It's never something truly dramatic, but then again, this car was already spectacular to begin with.

There are currently six pre-facelift versions of it out there, and now there are six more facelift ones available. The Tecnica is the latest one in the line-up, but Lamborghini will likely be bringing out at least one more version as a final hoorah.

All measurements are done using a Racebox device, so it might not be entirely accurate. As soon as the driver gets an open window, he proceeds with the on-track test. The Tecnica gets up to 62 mph in 3.46 seconds. It reaches 124 mph in 9.8 seconds.

Looking at the 62 mph to 124 mph acceleration time, it needed 6.5 seconds to get up to speed. That means it's slightly faster than a 2020 Huracan Evo Spyder but also slightly slower than a 2018 Aventador S. Well, at least that's valid according to the charts recorded by the guys at Autotop.nl. 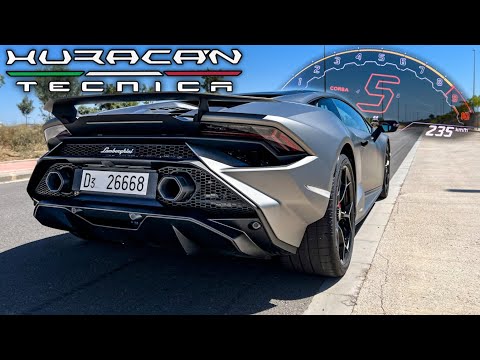