It has been a good year for Hot Wheels collectors around the world. Although some might argue that it has also been somewhat financially stressful. The number of Car Culture sets has increased compared to previous years, not going into the Mainline discussion. And the newest one includes some great castings, all of which are Toyotas.
29 photos

The Car Culture series by Hot Wheels was first launched in 2016, as Mattel tried to increase its sales among adult collectors. For the first year, they released a total of 4 sets, including Japan Historics, Euro Style, Trucks, and Track Day. For 2017 they increased the number of sets to 6, a rule they would follow throughout the next three years. But for 2021, that number has gone up to 8!

This year started with the British Horsepower set, and some people will argue that the Gulf McLaren F1 GTR was the best-looking car there. The Fast Wagons set was up next, and that saw the appearance of four older wagons alongside a 2017 Audi RS 6 Avant. Deutschland Design is the third Car Culture set released this year, and Exotic Envy was up next. Finally, slide Street is probably one of the best sets launched this year, especially for drift fans.

Hyper Haulers and Modern Classics came right after that, but collectors are now turning their attention to the new Toyota set. There are 5 cars included in the package, and you can get them for around $35, depending on where you live. The Toyota Supra MK IV is seen here in white, a color we've seen before for this casting. The Supra was first introduced by Hot Wheels in 2013, and this would be its 18th iteration.

A 1987 Toyota Pickup Truck is up next on the list, and "Back to the Future" fans are bound to be excited by this. It's not the first time Hot Wheels is offering this diecast, and you can get the BTTF replica if you look for 2014 models online. The 2000 GT is back once again, this time in white. This car was also available in the 2016 Japan Historics set, and most collectors will agree that the yellow and green livery looked much better.

A new addition to the Hot Wheels line-up is the 1981 Toyota Starlet KP61, seen here in red! Most people might have never seen one with their own eyes, but this scale model might increase its popularity soon. I've seen a lot of these cars being converted to drift cars, and even though they don't have a lot of power, they weigh under 800 kg! So it would seem that the KP61 is going to be the most sought-after model of this set, judging by the initial reaction of most collectors.

The fifth and final casting of the new Toyota Car Culture Series is a tan Land Cruiser FJ60. This '80s machine is well known among SUV enthusiasts and provides a nice touch to this mostly sporty line-up of diecast vehicles. All in all, the new set looks pretty impressive, although some hardcore fans have argued about the misrepresentation of some countries throughout the year.

Out of the 40 cars being offered in the Car Culture Series this year, 15 are Japanese, eight are from the UK, seven from Germany, five from the US, two from Sweden, while Italy and France both get just one representative. This may either be a question of licensing costs or just the way Hot Wheels maps out its strategy according to the best-sold products. 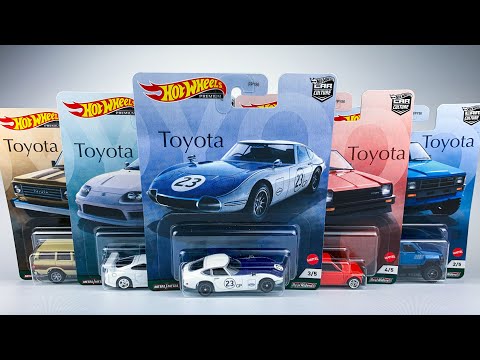